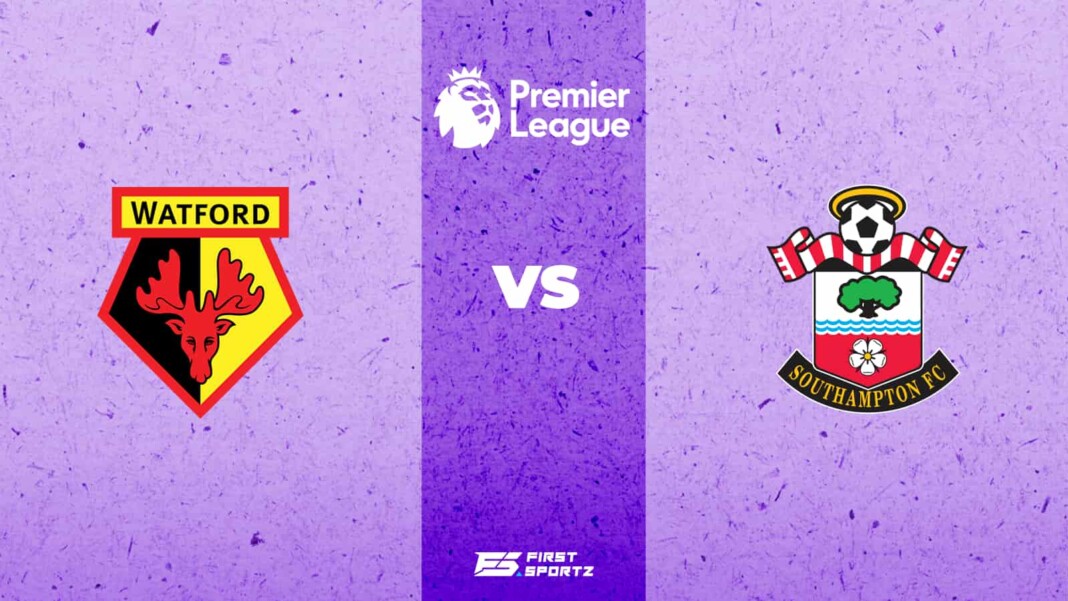 Claudio Ranieri’s side came crashing back down to earth following their impressive 5-2 victory at Everton last weekend, and it is now back-to-back home defeats for the Italian after he replaced Xisco Munoz as Watford manager earlier this month.

Southampton were the better side throughout this encounter, dealing the decisive blow when Adams picked his spot from Adam Armstrong’s pass after 20 minutes, bending his right-foot finish into the top corner – but the visitors missed a host of chances to extend their lead.

The result means Saints move up to 14th in the table on 11 points with Watford slipping down to 16th place on 10 points after as many games.

Jeremy Ngakia (6/10) – Didn’t enjoy coming up against the experience and speed of Redmond, who very much had his number on several occasions throughout the 90 minutes.

Will Troost-Ekong 5/10 – Didn’t cover himself in glory for Adams’ goal, when he could have stepped out quicker. Needs to do more, or he might find himself out of the team.

Craig Cathcart  4/10 – Almost turned the ball into his own goal early on, but Foster came to the rescue. Asleep for the winner, allowing Adams to nip in, turn and curl home.

Adam Masina  5/10 – One of a cluster of Watford players who just don’t look comfortable at this level.

Moussa Sissoko – 6/10 – Full of desire and running in that midfield, but he was having to do the work of at least two players in a flat Watford team.

Juraj Kucka 4/10 – Not really sure what he offers in this midfield. Not good at anything, and not even average at best at some particular skills. They can do better.

Joao Pedro 5/10 – Made his first Premier League start, but couldn’t make any serious impact on the game. Full of talent, but needs the platform to show it.

Ismaila Sarr 6/10 – Always a threat when carrying the ball, but got it stuck under his feet a couple of times and the final delivery just wasn’t there.

Josh King  5/10 – Nullified by Saints’ strong backline in the first half, and looked much more isolated than in the victory over Everton.

Cucho Hernandez – 5/10 – Wanted to move inside and curl the ball into the middle, but rarely got the chance. Too many attacking players spoiled the broth.

Alex McCarthy 7/10Made a couple of routine saves in the first half as he was rarely troubled, but he was relieved to see Walker-Peters behind him after being beaten at his near post by Ismaila Sarr.

His distribution could have been better though, but he made a superb save late on to deny Ashley Fletcher as Watford piled forward in search of an equaliser.

Tino Livramento 8/10 Another fine display from the former Chelsea academy player of the year.He got forward well from right-back and was a real threat for Southampton, while he used his nous to earn a couple of free-kicks.

Jan Bednarek 7/10 Back alongside Mohammed Salisu, he did little wrong as he battled against Josh King, with the Norwegian getting little joy against the Saints defence.

Mohammed Salisu 8/10 Gave the ball away cheaply early on, but showed his positional awareness on several occasions as he made some vital challenges and interceptions.

Dealt well with balls in the air and looked equally as comfortable on the floor, while he rose to the physical challenge offered by Watford.

Kyle Walker-Peters 8/10Restored to the team at left-back and he did well, getting forward from defence to support the attack.He did his job defensively too against a difficult opponent in Ismaila Sarr, with Walker-Peters getting back superbly to make a goalline clearance to deny the Watford winger an equaliser.

Oriol Romeu 7/10Lucky to escape an early booking after bringing down Ismaila Sarr in a central position.

Did his usual job well in breaking up play in midfield and keeping the ball moving, in what was another solid performance from the Spaniard.

James Ward-Prowse 7/10 Back in the team after serving a three-match suspension, he put in a good shift in the middle of the park.He got stuck in and got Saints moving forward, while his delivery from set pieces once again offered a threat for Southampton.

Nathan Redmond 7/10 Got down the left into some good crossing positions early on. Worked hard and linked up well with Walker-Peters down the left-wing, before switching flanks in the second half.However, his delivery was at times disappointing, with Redmond failing to beat the first man on more than one occasion with his crosses.

Mohamed Elyounoussi 7/10 Had a snapshot that hit the side netting. Worked tirelessly down the right, but didn’t get too much joy. However, he was able to constantly find space between the lines as he caused Watford problems, particularly in the first half. Booked in the second half as he switched to the left.

Che Adams 7/10 After scoring his first goal of the campaign in midweek, he worked hard up front and gave Saints the lead with a delightful finish, picking the ball up on the edge of the box before finding the top corner to five Ben Foster no chance.

He really should have added a second thought when he was found by strike partner Adam Armstrong, but he somehow contrived to head the ball down into the ground and over the bar from inside the six yard box.

Curled an early effort past Ben Foster’s upright, but missed a great chance when found in the box by Kyle Walker-Peters. Couldn’t get over the header though as it went over the bar.Kept getting into good positions and he went close with a couple of other efforts that flashed past Foster’s post.

The Scottish international was introduced for the final 21 minutes.

He got forward into some good positions, but didn’t always pick the right pass.

Ibrahima Diallo 5/10 The Frenchman was brought on to try and see out the game and he did his job in the midfield. 5

Lyanco Not enough time to make an impact. N/A