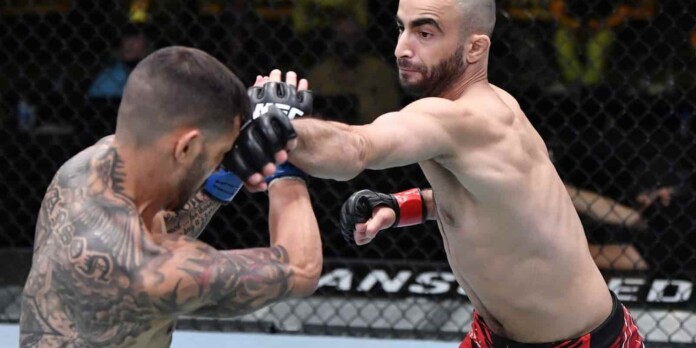 Giga Chikadze produced a stunning leg kick liver shot that dropped the experienced Cub Swanson in less than two minutes of the first round of their co-main event at UFC Vegas 25. The Georgian thereby extended his UFC win streak to 6 and might probably break into the top 10 of the featherweight rankings.

At the post-fight press conference, he called out the number 1 ranked featherweight contender Max Holloway, saying he has always admired him as a fighter, and believed that he might get to fight him after such a performance. Chikadze said, “I enjoyed this fight, and every time he did something nice, [I said], ‘Oh, how I want to fight him. I feel like after this type of performance, I might get it. And if not, maybe I can get his opponent.”

Chikadze then called out two more fighters, one during the post-fight press conference and the other on Twitter. The first one was Yair Rodriguez and the other, veteran fighter Donald Cerrone.

‘It has to be real Mortal Kombat‘ – Giga Chikadze

At the post-fight press conference, Chikadze said, “I’m going to say something I really want to say: If the fans and [UFC President] Dana [White] and [UFC matchmaker] Sean [Shelby] really want to see … something special, I think [me] versus Yair Rodriguez will be a real ninja fight. At some point, I believe this fight has to happen. It has to be real Mortal Kombat. I would love this fight, and plus, he’s been pulling out of fights for the last few times, and I’m not that dangerous.” [via MMA Fighting]

Yair Rodriguez just recently served a suspension and was eligible to compete again from the 8th of March, this year. His last fight was way back in 2019, against Jeremy Stephens.

Donald Cerrone was supposed to fight Diego Sanchez and end him violently. But then Diego Sanchez was released by the UFC in double-quick time following a huge medical-record controversy. The UFC haven’t found a replacement yet for Cerrone.

In the wake of this, Chikadze tweeted after his win over Cub Swanson that he would like to face Donald Cerrone next week.

His tweet read: “Hi @Cowboycerrone I know you need someone to fight for next week i’m here in Vegas ready it will be an honor Samurai style.@seanshelby @danawhite.”

Lakshya Chopra - May 15, 2021
Star couple, Gael Monfils and Elina Svitolina have been in the limelight ever since they announced their engagement last month. The news came as...