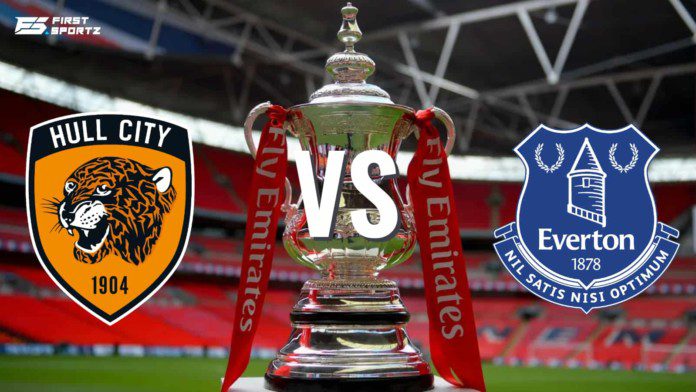 Hull City vs Everton: Hull City squared off against Everton at the MKM stadium in the third round of the ongoing edition of the FA Cup.

Hull City took the lead in the 1st minute with a superb header from Tyler Smith. Hull City dominated the first twenty minutes but Everton equalized and also took the lead within a span of 10 minutes with a goal from Demarai Gray and André Gomes. In the second half, Hull City is equalized with a sublime strike from outside the box by Ryan Longman.

The match went into extra time and Andros Townsend scored the winner for Everton in the 1st half of the extra time with a super strike from a long distance outside the box.

Let’s take a look at the player ratings for Hull City vs Everton match:-

Nathan Baxter (5.5/10): The goalkeeper did not have a very pleasant performance tonight as he was scored past thrice in the match. His ball distribution was however bit decent.

Di’Shon Bernard(5/10): The center-back’s performance was not good and not bad either. He could not deal very well with Demarai Gray, which lead to the 1st goal for the away side.

Jacob Greaves(5/10): The young center-back had a decent performance tonight making some stops and shots. However, he was sloppy at times and made some bad tackles.

Tyler Smith(710): The striker was on target in the 1st minute of the 1st half as he scored a header from a free-kick. He was also good on the ball.

Sean McLoughlin(5/10): The right-back had a good performance tonight playing some good passes and carrying the ball well.

Greg Docherty(5.5/10): The Scottish midfielder made some decent passes and linked up well with his teammates. He also had a couple of shots at the goal.

Richard Smallwood(5/10): The central midfielder made some good interceptions and sometimes kept the tempo of the game up. However, he was slow to react sometimes.

George Honeyman(6.5/10): The English midfielder provided the assist for the goal from a free kick in the 1st minute. He was also very good on the ball made some good passes.

Randell Williams(5/10): The winger had a very ordinary performance tonight. He could only manage some link-up passes and a few crosses.

Tom Eaves(6/10): The striker was always a threat in the front, putting pressure on the defenders. He also attacked the ball with his head whenever he got the chance.

Keane Lewis-Potter(5.5/10): The forward would not be very happy with his performance tonight as the only thing he could manage was a couple of shots and a few passes. He could have done more with the chances he had.

George Moncur (5.5/10): He had a decent performance coming off the bench, played some good passes, and did put crosses into the box. He assisted the 2nd goal for Hull City.

Tom Huddlestone (5.5/10): He played some good minutes on the pitch and linked up very well with his teammates. Also made some good interceptions in the Hull City vs Everton contest.

Ryan Longman (6.5/10): He had a very effective time coming off the bench as he scored the 2nd goal for Hull City with a sublime strike from outside the box to the left corner.

Asmir Begovic (6/10): The Bosnian goalkeeper made a couple of good saves and his ball distribution was also decent. However, he was scored passed twice by the home side.

Ben Godfrey(5.5/10): The English center-back was somewhat solid in the defense making some good blocks and stops. However, he did make some nervous decisions.

Michael Keane(5.5/10): The center-back also had a decent performance in the heart of the defense making some good blocks and playing some good passes with the midfielders.

Vitaliy Mykolenko(5/10): The Ukrainian left-back had a pretty ordinary performance making some good runs with and without the ball. He also did lose the ball a couple of times.

Seamus Coleman(5/10): The Irish international and the Everton skipper had a decent performance tonight making some good blocks and also carrying the ball well.

Anthony Gordon(6.5/10): The attacking midfielder was all over the pitch and played some excellent passes. He also assisted the 1st goal for the home side.

André Gomes(7/10): The central midfielder scored the 2nd goal with a good header from a cross from Jonjoe Kenny. He also played some excellent passes and carried the ball very well.

Allan(6/10): The Brazilian midfielder had a good performance tonight with his fluid passing and pressing. He also carried the ball very well in the opponent’s half.

Salomón Rondón(6/10): The Venezuelan striker worked hard running and putting pressure on the Hull City defenders. He also made a couple of shots at the goal without much impact.

Demarai Gray(7/10): The winger was by far the best player on the pitch for the away side as he always looked a threat whenever he was on the ball. He scored the equalizer with a brilliant link-up goal in the 1st half.

Jonjoe Kenny(6/10): The right-back playing as a right-winger had a decent performance tonight as he provided the assist for the second goal. He kept running up and down the right side and provided support for the forwards.

Andros Townsend (7/10): He scored the winner in the 1st half of the extra time with a super strike from outside the box. He also played some excellent passes and linked up very well with his teammates.

Abdoulaye Doucouré (5/10): Though he was not very effective coming off the bench, he played some good passes and carried the well in the time he played tonight.

Jean-Philippe Gbamin (4.5/10): He did not do much after coming on, apart from providing the assist for the winner in the Hull City vs Everton game.