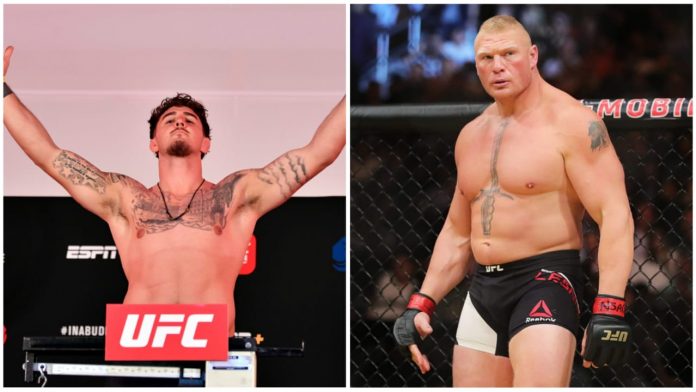 The UFC Heavyweight fighter Tom Aspinall is going to make a name for himself by facing the former UFC Heavyweight champion Andrei Arlovski on Fight Night: Blaydes vs Lewis.

Aspinall is riding on a two-fight win streak coming against Jake Collier and Alan Baudot and both his wins come via TKO. Now with a win against Arlovski, he is looking to make a statement in the Heavyweight division.

In his latest interview with The Schmo, Aspinall called out one more former UFC Heavyweight champion, Brock Lesnar, and said he can’t take that smoke now as he is not suited for UFC now.

Aspinall says, “If Brock Lesnar wants it, he can get the smoke. That’s all I’m saying,”. Brock Lesnar last fought inside the Octagon in 2016 against Mark Hunt. The result of this fight is overturned to no contest later on after Lesnar found using PED’s.

Since then Lesnar returned to WWE and never competed back in UFC but still, fighters keep calling Lesnar to face them.

Tom facing Andrei Arlovski is going to be his first major test inside the Octagon. This will determine that he is ready to face the Heavyweight giants in UFC or not but during the pre-fight press conference,

Aspinall says, “I won’t be getting starstruck by Andrei Arlovski’s success and the only thing in which Arlovski beats him is experience and gray hairs”. Such heavy words from a fighter who fought just two fights in UFC seem to be a little fictitious.

Now we’ve to wait and see will Aspinall rise and shine throw the Heavyweight division or Arlovski will give him the first defeat of his UFC carrier.