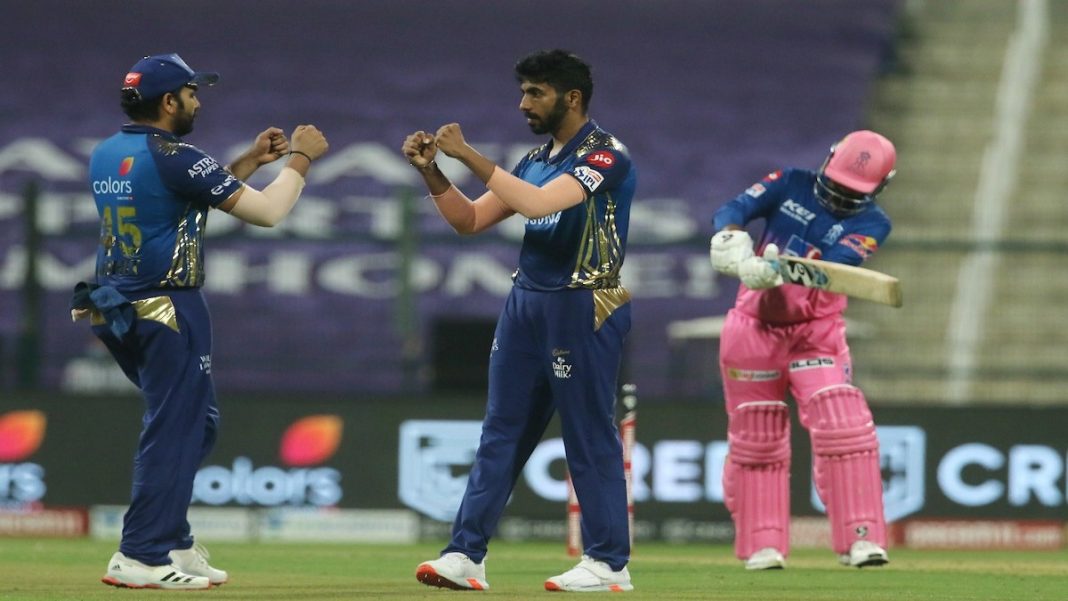 Mumbai Indians (MI) secure their fourth win of IPL 2020 after defeating Rajasthan Royals (RR) by 57 runs margin. Jasprit Bumrah and Suryakumar Yadav turned out as the match-winners for MI as RR crumble chasing 194 runs set by MI. Bumrah bowled the best bowling spell in IPL 2020 with 4/20 in four overs.

Rohit Sharma won the toss for MI and decided to bat first. The decision turned fruitful as MI made a massive 193/4 after Suryakumar Yadav’s unbeaten 79 runs. RR’s start while chasing another big score in IPL 2020 was bad and Yashasvi Jaiswal who replaced Robin Uthappa went for a duck in the first over. Jos Buttler was the only positive for RR as the opener played a 70 run inning for Rajasthan.

However, other than Buttler, none of the RR batsmen could play a helpful knock as RR crumbled chasing MI’s target. RR could make 136/10 and were dismissed in the 18th over itself. Sanju Samson and Steven Smith got out quickly, which led to RR’s batting lineup collapsing in the 19th over of the match.

Mumbai Indians bowlers were once again successful in defending a target set by the batsmen. Jasprit Bumrah picked up the wickets of Smith, Archer, Tewatia, and Gopal. This is also Bumrah’s best bowling figures in the Indian Premier League(IPL). Trent Boult and James Pattinson picked two wickets each for 19 and 20 runs respectively. Only Krunal Pandya was the bowler who remained wicketless while Pollard and Rahul Chahar picked one wicket each. MI’s fielding performance was exceptional. Anukul Roy and Kieron Pollard took brilliant catches.

This is the fourth match MI have won defending a target. Previously they won by 49,48 and 34 runs in the tournament. This instance is the highest victory by runs for MI in IPL 2020.

Suryakumar Yadav’s unbeaten 79 runs build a base for MI

Earlier Mumbai Indians winning the toss and batting first started brilliantly with Quinton de Kock and Rohit Sharma scoring 49 runs in the fifth over. However, skipper de Kock got out for 23 runs and Suryakumar Yadav joined Sharma on the pitch.

leg-spinner Shreyas Gopal gave an important breakthrough for RR after taking the wickets of Rohit and Ishan Kishan in two deliveries. However, Yadav along with MI’s lower-order batsmen chipped in improtant runs who eventually managed to score 193/4.

Debutant for RR Kartik Tyagi and Jofra Archer picked up one wicket apiece, while Gopal took two wickets in the game. Other than the three no bowler could pick any wicket for RR.

Rajasthan Royals have now lost three games in a row after the historic highest run-chase against Kings XI Punjab. Mumbai Indians on the other hand win their third game in a row and a massive 57 runs victory in IPL 2020.

Also Read:IPL 2020 MI vs RR: Here’s how Twitter reacted to the return of Yashasvi Jaiswal