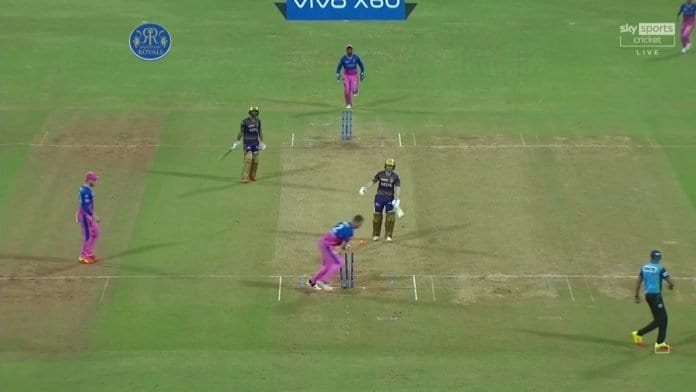 Kolkata Knight Riders (KKR) were put in a real spot of bother in their Indian Premier League (IPL) match against Rajasthan Royals (RR) due to a horrible mix-up between skipper Eoin Morgan and Rahul Tripathi which led to the former getting run out by Chris Morris. It was a key moment in the match as the Englishman had just walked to the crease with the run-rate on the lower side.

Both KKR and RR are on 1 win from 4 matches. While KKR won their first match before losing the next three, RR won their second match while suffering losses in the other three. Thus, the clash is extremely critical to both sides’ ambitions as a loss would lead to a bit of a pickle, with other sides pulling away. However, KKR seemed far from their best at the Wankhede Stadium despite the fact that a run-fest was expected.

Earlier, put in to bat, the KKR openers got them off to an indifferently slow start. Shubman Gill struggled to get going, as did Nitish Rana. After the former’s dismissal, Rahul Tripathi played some cracking shots to up the ante a bit. Soon after a strategic timeout, Rana was dismissed as well leading to Eoin Morgan walking to the crease. The skipper had not been in good form and it was a perfect opportunity to come good.

However, even before he had faced a ball, Morgan got run out. It happened when Tripathi hit an arrowing straight drive that hit Morgan’s outstretched bat. Before Morgan could realize what was happening, he started running and so did Tripathi. By the time the duo realized there was no run, it was too late as Chris Morris the bowler dislodged the stumps by running to it.