With Kevin Durant side-lined, it was Kyrie Irving who took matters in his own hand to lead the Brooklyn Nets against the Washington Wizards and register a hard-fought win for the away team. Scoring 30 points and 7 rebounds in Nets’ victory over the newly-shaped Wizards, Irving managed to once again win hearts of NBA fans after a heart-warming gesture made to a young fan.

The seven-time All-Star surely made the day for a young fan at the Washington’s Capital One Arena and fans cannot have enough of it. After the game got over, Irving handed his worn-shoes to a young fan who wore his jersey. Moreover, he even signed it before handing it over to lucky fan. Watch the video below and know how the fans reacted upon the same.

It seems like Kyrie Irving has had enough of criticism and negativity thrown his way because of his vaccine stance and had finally decided to bring in some positive energy, which is even visible in the same video.

Take a look at how fans reacted upon the same-

The Nets had four out of their five starters. Apart from Kyrie Irving blasting with 30 points, LaMarcus Aldridge registered 27 points against his name. On the other hand, Bradley Beal eld the charts for the home team with 23 points.

Kevin Durant less Brooklyn Nets have been below par but until Kyrie Irving took matters in his own hand, the away team found it difficult to bamboozle the Wizards’ defense.

That being said, the Brooklyn Nets will rely on Kyrie Irving for more such performances and will hope that the seven-time All-Star can run their attacks in the same away as today. With Miami Heat, Milwaukee Bucks and Chicago Bulls all looking to lead the Nets in the standings, Irving surely has had his say and what quality he can provide in the road games for Steve Nash’s team.

Also Read: “He was out ever since Magic Johnson tweeted” Skip Bayless urges…

Also Read: Giannis Antetokounmpo Girlfriend: Who is Mariah Riddlesprigger? Since when have the… 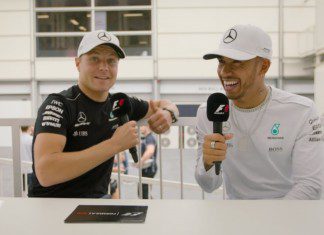 Manan Goel - May 12, 2022
Valtteri Bottas left Mercedes for Alfa Romeo as the seat was given to the young driver of Williams, George Russell. But the Finn hasn't...