Safe to say, if the recent reports against Phoenix Suns owner Robert Sarver are about to be proved true, then the Western Conference team could find themselves in a world of trouble soon. Earlier, NBA Insider Jordan Schultz that NBA is bracing itself to accuse Sarver of “racism, sexism and sexual harassment in a series of incidents.” The reporter also mentioned that the evidences compiled in the huge piece could push the league to forcibly remove ‘the culprit’ as a franchise owner.

Now in a follow up story of Arizona Sports, the same reporter, Jordan Schultz shared that there are testimonials from the likes of former head coach Earl Watson and ex-GM Ryan McDonough. On the other hand, Phoenix Suns and Robert Sarver have already denied all such accusations. Moreover, the team urged fans to not frame judgments based upon the published reports.

“This report is a monster,” Schultz said. “As bad as you might think it might be for us to be having this conversation, it’s worse. What I was told some of the things that are going to surface in this report, including sexual harassment, it is jaw-dropping. There’s just no way that with all of these people on the record, men and women, that he’s going to be able to survive this in my eyes.

“What I was told was that there has been a kind of sweep under the rug culture that he has fostered,” he added.

Having said that, it is still unknown when the said report will be published and where. However, the NBA certainly needs to be ready for what should be a huge wave of media backlash. With controversies taking place one after the other, some hoop fans have already regarded NBA 2021-22 Season as the most controversial in the modern-era. 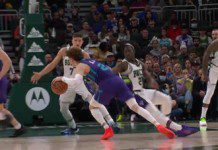