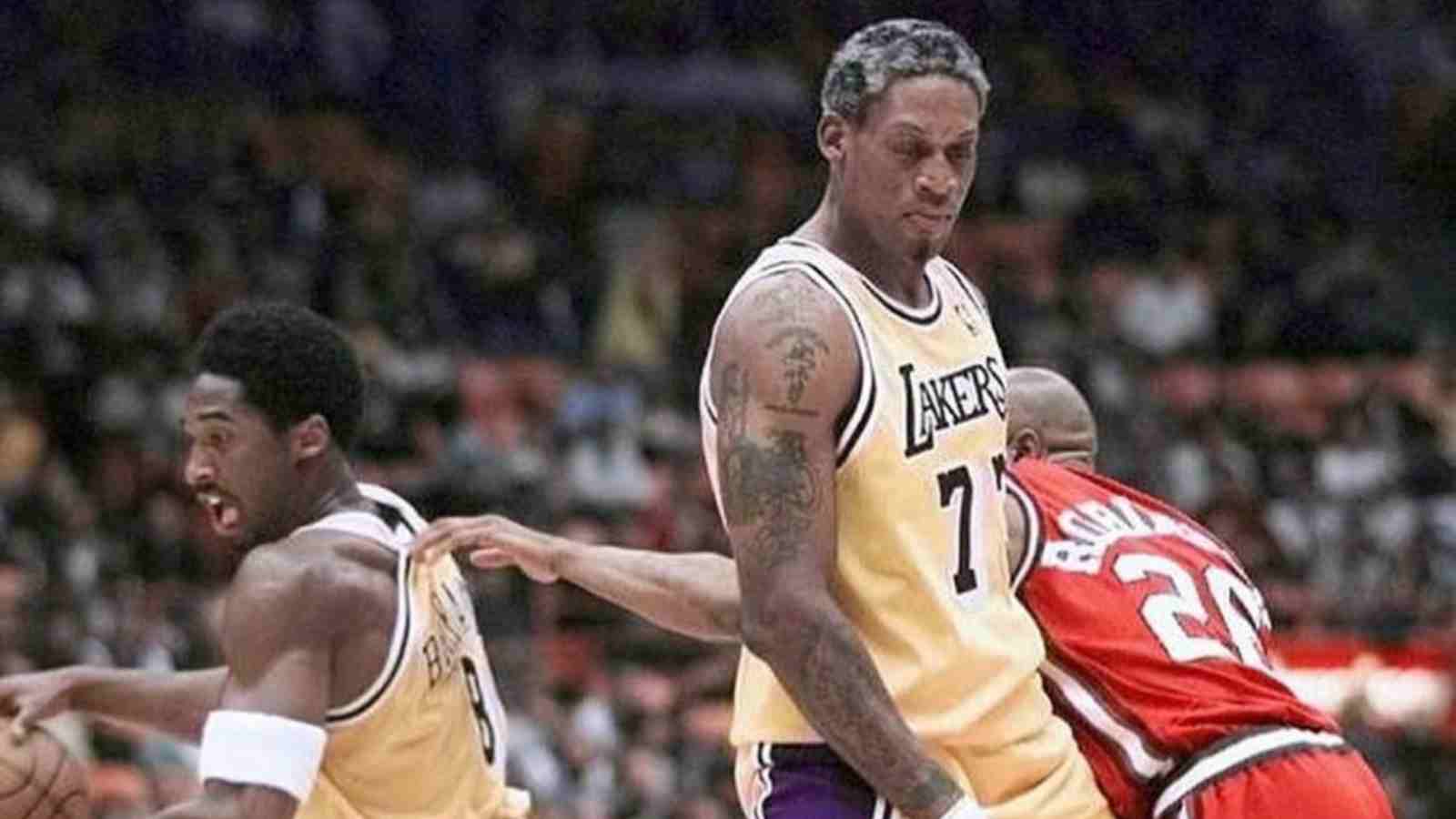 Dennis Rodman setting a screen for Kobe Bryant in 1999

Dennis Rodman was discovered on a tape verbally attacking Kobe Bryant on stage at the W Hollywood Hotel back in 2013. Bryant and Rodman were once teammates, which is apparently all it took to inspire some sort of hostility toward the late Los Angeles Lakers star. When they played together in the 1998–1999 NBA season, Rodman was in his last season and Kobe was just three years into his. Both players had incredibly successful NBA careers at the time. Despite the fact that Kobe and Rodman only partnered for a year, evidently it was enough time for The Worm to become ill of the Black Mamba.

Why Rodman is criticizing his old teammate is unclear. The two played together with the 1998–1999 Lakers during a lockout–shortened season, making it all the way to the conference semifinals before the San Antonio Spurs swept them. It’s important to note that former teammates have criticized the Black Mamba in public before. Shaquille O’Neal dissed the shooting guard in 2008 after he shared three of his five rings with Bryant. The point guard for Los Angeles between 2005 and 2007, Smush Parker, also got into an altercation with Bryant in 2012. Because of his intense work ethic and competitive nature, Bryant is certainly a difficult teammate to be around, and that may be the root of all of this.

Dennis Rodman is a phenomenon in the NBA when it comes to grabbing rebounds. The two-time Defensive Player of the Year Rodman contributed immensely to the success of the Bulls and Pistons dynasties’ championship teams. He was given the nickname “The Worm” in appreciation of his propensity to escape from a crowd with the ball. The seven time rebounding champion had a career-high 18.7 rebounds per game in 1991–1992, which was unusual for his stature. Rodman was acknowledged as one of the greatest players in league history by being inducted into the Naismith Memorial Basketball Hall of Fame in 2011. He was also chosen for the NBA 75th Anniversary Team in 2022.

Kobe Bryant, a remarkable player for one of the most prominent teams in the NBA, has built a stellar career. He was the Lakers’ all-time top scorer, the league MVP, and the Finals MVP two times. In the early 2000s, he also had a key impact on five separate Lakers championship squads. Bryant subsequently developed into one of the league’s all-time top scorers, earning him recognition as one of the greatest players in NBA history. Only Karl Malone, LeBron James, and Kareem Abdul-Jabbar are ahead of him on the NBA’s all-time scoring list. Bryant was a member of the 2020 Class for the Naismith Memorial Basketball Hall of Fame’s posthumous induction as well as the NBA 75th anniversary team.

2013 saw Dennis Rodman make an odd appearance at the W Hotel in Hollywood, where he seemed to have something against Kobe Bryant. Rodman was having fun while singing along with the jazz band. Then, a question about Kobe Bryant being “the s**t” was posed to Rodman. The former NBA great was startled by it, and he replied with a profanity-laced outburst. He said: “Kobe Bryant … one thing — f**k him,  F**k him. F**k him. I’ll say it again, f**k him.” Rodman then repeatedly yelled “F**k him” in reference to the local Los Angeles Lakers great after a brief round of applause.

Fans joined in the fun as well, maybe criticizing Kobe for the Lakers’ long struggles with Dwight Howard and Steve Nash in the 2012-13 season. The biggest enigma, though, is still why Rodman retaliated in the first place. All of this happened because Bryant noticed that his teammates weren’t putting in the same amount of effort to perfect their profession. It just didn’t sit well with him, so he learned to deal with the harsh treatment by pushing his teammates harder during practice.

Also Read: “He could’ve done anything with the ball” Larry Bird says he was never able to read Magic Johnson’s mind