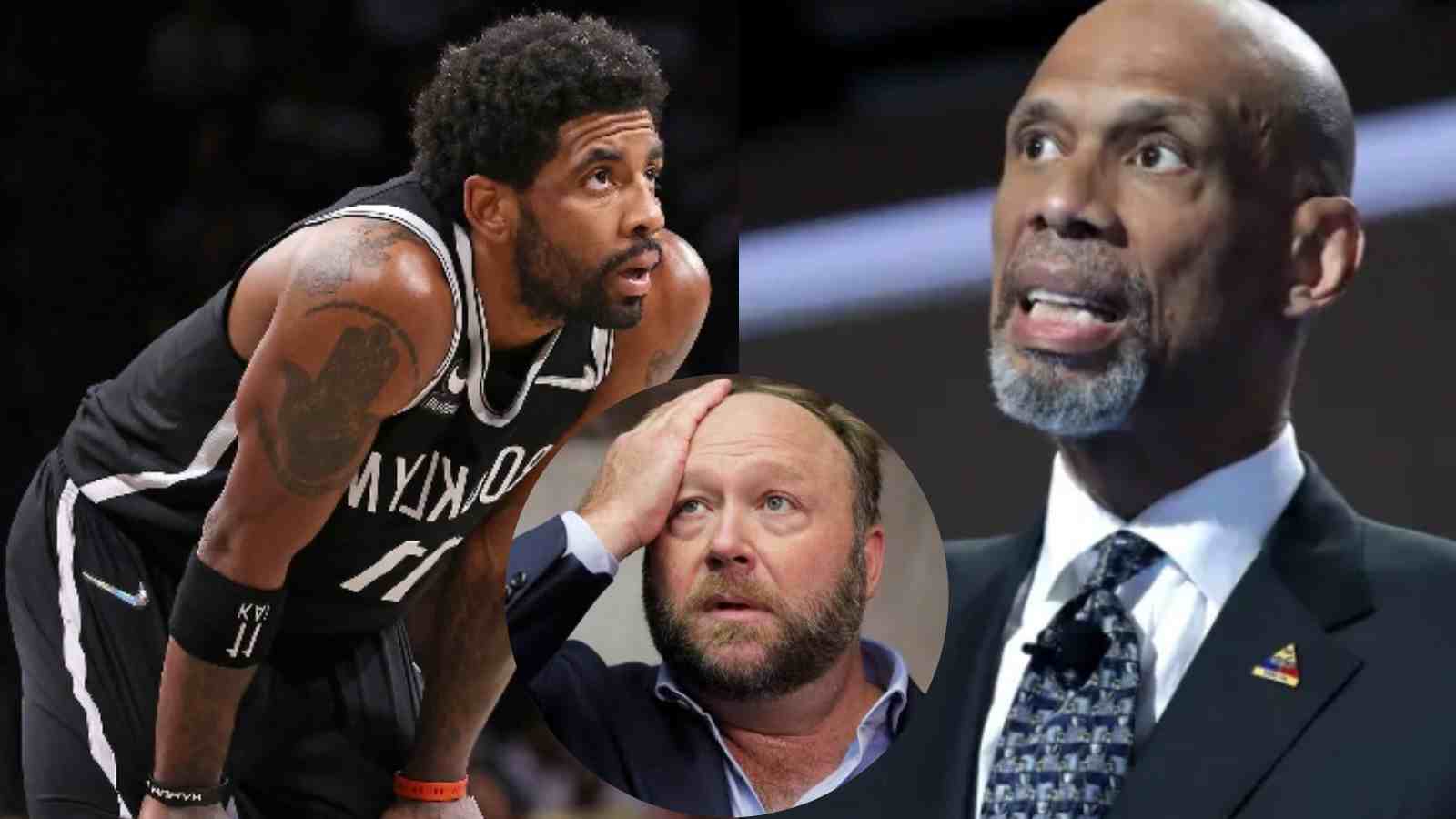 Kareem Abdul Jabbar is back in the NBA headlines and the reason is again him criticizing and firing some shots at Kyrie Irving. But the reason for those shots this time isn’t his vaccination status. Instead, it’s the Alex Jones Clip shared by Uncle Drew which has already landed him in trouble, and now he also has Kareem Abdul Jabbar hating on him with strong words of his. Kyrie Irving though has lived up to the expectations as from believing the Earth to be flat to riding with a conspiracy theorist, Alex Jones.

Kareem Abdul Jabbar has been a strong hater for Kyrie Irving since the past years and this time his take makes sense to many around which is very unexpected. Kyrie Irving shared a vintage 2002 clip of Alex Jones which was titled as “Never Forget ALEX JONES TRIED TO WARN US” on his Instagram stories. The conspiracy theorist has been saying a lot of stuff for decades now. But none of those can be claimed as right or wrong as they are conspiracies for a reason.

Further, Alex Jones added: “And yes, today in 2002, there is a tyrannical organization calling itself the New World Order pushing for world wide government, a cashless society, total and complete tyranny. By centralizing and socializing health care the state becomes god basically when it comes to your health. And, then by releasing diseases and viruses and plagues upon us, we then basically get shoved into their system where human beings are completely worthless.”

Nothing really can be commented about the conspiracy maybe Kyrie Irving knows a little more about it compared to us. But unfortunately, he shared the video clip at the very wrong time. As Alex Jones is currently on a trial and was sued by the parents of 20 children killed at Sandy Hook Elementary School, Newtown on December 14, 2012. According to him, no one was killed and it was just staged by crisis actors.

So guys like Kareem Abdul Jabbar who are criticizing him based on many such points aren’t wrong and it all makes sense. As Kyrie has really shown out his support for something which is very controversial already. It’s going to be a lot of effort for Uncle Drew to win his lost respect back on the court and even off the court. As the haters for him are really strong in numbers and honestly he deserves some of those.

Also Read: “No one can justify being Dennis Rodman” NBA Twitter reacts to Jonathan Majors playing The Worm in 48 hours in Las Vegas.

Kareem Abdul Jabbar criticizing Kyrie Irving wrote: “Kyrie Irving’s thought process is an example of what happens when the education system fails. Last October, I wrote a piece about Kyrie Irving’s refusal to get vaccinated against COVID-19 (“Should We Just ‘Leave Kyrie Alone?”) and why this reckless choice was destructive to the country and especially the Black community where he would be an influential role model. The facts proved that accusation to be true. Irving didn’t care. He continued to promote his anti-vax sentiments—regardless of the cost in lives and health to others—proclaiming himself a ‘martyr.’ Not kidding…”

Further, Kareem Abdul Jabbar like always took a shot at Kyrie Irving for not being vaccinated and went on to talk about him being rich and how he buys yes-people around him. Then getting back to the main and important topic he wrote: “Alex Jones is one of the most despicable human beings alive and to associate with him means you share his stench. Kyrie Irving would be dismissed as a comical buffoon if it weren’t for his influence over young people who look up to athletes. When I look at some of the athletes who have used their status to actually improve society—Colin Kaepernick, LeBron James, Muhammad Ali, Bill Russel, Billie Jean King, Arthur Ashe, and more—it becomes clear how much Irving has tarnished the reputations of all athletes who strive to be seen as more than dumb jocks…”

Kareem Abdul Jabbar also took several shots at Alex Jones for the ongoing trial he is a part of. He ended his take by mentioning Kyrie Irving’s shoe deal with Nike which can soon end also talked about the generational wealth he has already earned. His comparison for Uncle Drew with all-time great personalities have also made many people switch side and now it’s time for the Nets’ guard to shut them all down by his on-court greats if he wants to.

Also Read: “Nia Long deserved better than this CHEATER” Ime Udoka reportedly had multiple affairs and even slept with wife of a minority owner

Also Read: “I used to live in the shadows” Brittney Griner broke a player’s nose after being frustrated to hide her reality in public