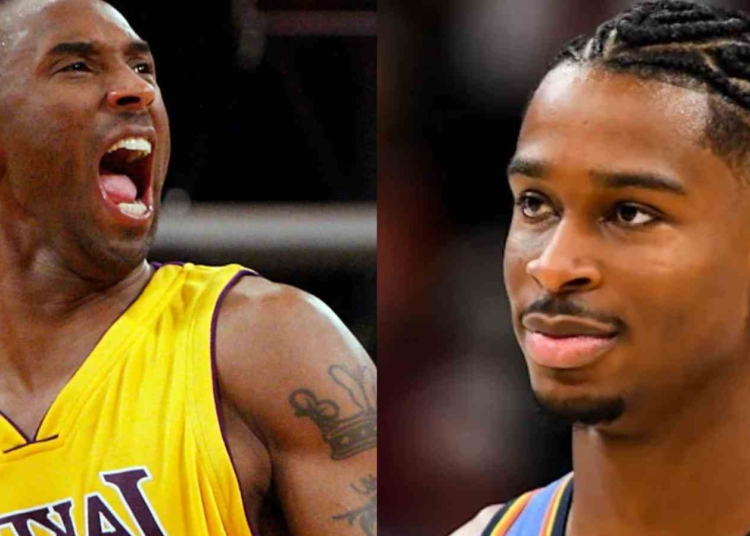 Kobe Bryant has been an inspiration for many generations of players in the league, and many believe he is the GOAT over others. The GOAT debate in the NBA has been going on for decades now, and there is not one list that everybody agrees to. Michael Jordan, LeBron James, Kobe Bryant, Kareem Abdul Jabbar, people have different names at the top of their lists. When it comes to ranking the GOATs, a lot of factors come into play and not one yardstick could be taken as the decisive factor for ending the debate. The era of basketball, the longevity, the years of dominance, rings, the skillset to elevate when it mattered the most, everything is considered to crown a player as the GOAT.

A recent video of Shai Gilgeous-Alexander giving his opinion on the GOAT debate on Tiktok went viral on the internet. Shai was heard saying, “Kobe is Michael Jordan. Just on steroids.” However, the kid in conversation with Alexander wasn’t satisfied. When the kid tried telling Alexander that he [Shai] was talking about skills, not the best player, Shai replied, “Kobe has five rings, what’s your argument!” Shai further added that Kobe was the greatest when it comes to all-round.

Kobe had everything similar to Jordan’s game, even his style, but as many consider Bryant had more skills than Jordan. He had perhaps the best footwork in NBA history, better mid-range than anyone, and had the heart of a lion. Bryant wanted to transcend his own skills with his hard work and had a work ethic that still amazes NBA players. The video of ‘Black Mamba’ walking off the court after he tore his Achilles tendon is still legendary.

Also Read: “LeBron James is still playing” Giannis Antetokounmpo gets honest on being deemed as the ‘face’ of the league

Shai Alexander ranked Kobe at the top of the GOAT’s list, followed by LeBron James, and Michael Jordan respectively. Despite disagreements on the question of the Greatest of All Time, most people agree that Jordan, LeBron, and Kobe are on Mount Rushmore of basketball.

Kobe Bryant was MJ’s resurrection, he came to the league as a kid and left with a legacy and legends that still leave folks’ jaws dropped. He was fierce and revengeful, Kobe is a name that gave the Lakers a life again after Showtime Basketball of Magic Johnson’s era. Players still talk of Kobe’s look during games that froze the opponents. Kobe won 5 championships, and 2 finals MVPs for the Los Angeles Lakers, and many consider him the greatest Laker of all time.

For many young and older generations of fans and former NBA players, LeBron James has surpassed everyone and established himself as the goat. Despite having a difficult childhood with a single mom James defied obstacles to reach the pinnacle of basketball. James has won four rings and dominated the NBA for 2 decades. Despite being in year 20 of his career in the NBA, LeBron is among the best players in the game today. With 4 regular season MVPs, 4 NBA championships, and 4 Finals MVPs, LeBron has achieved and even surpassed the expectations that were put on him.

Jordan is still considered by many as the GOAT of basketball. There is a reason he is called ‘The Black Jesus.’ MJ was perhaps the only player in basketball who came close to perfection. Generations that watched Jordan play the game and dominate his opponents still consider him the GOAT. Jordan was undefeated in the finals and his legends are still shocking to many players. He won 6 NBA championships, 5 league MVPs, and 6 finals MVPs in his career.

Also Read: LeBron James was embarrassed to go to school after his mother Gloria was convicted of 14 days for petty crimes