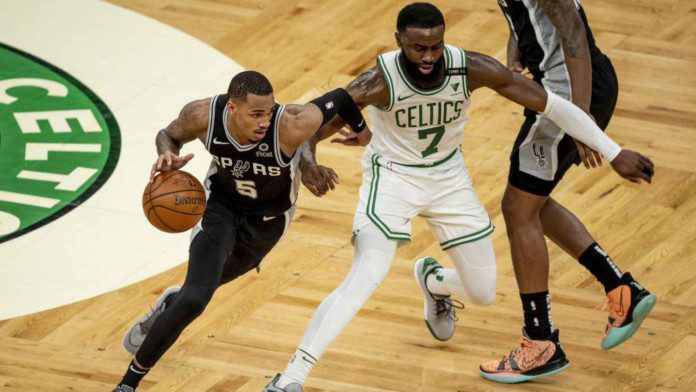 The Spurs’ Dejounte Murray literally threw an Uno reverse at the clutch point against the Boston Celtics. The Spurs closed the deal in their favor by winning over the Celtics by 96-88. This was Celtics 2nd consecutive defeat.

Since their win against the Sacramento Kings on November 11, the Spurs haven’t had a chance to taste the victory. With six consecutive losses against the opponents, yesterday’s victory was a much-needed one. The Spurs are currently at 5-13 and are one of the lowest-scoring teams this season. With a record like this, the win against the Boston Celtics was crucial.

The San Antonio Spurs and Boston Celtics locked horned yesterday at the AT&T Centre. The Spurs were in poor form but the hosts have won almost 50% of the home games this season. And, it proved correct when they defeated the Celtics to take their Home Game score to 3-6.

The Spurs started off great when they gained over a 15 point lead against the Celtics in the first round. They kept the lead till halftime. But post half time is a typical cinematic 180-degree plot twist. The Celtics weren’t going to let go of the game that easily. They dropped 26 points against Spurs’ 18. The Celtics were yet to cover the lead but the Spurs learned their Lesson.

“They took a big hit,” said Spurs coach Gregg Popovich in the post-match conference. He further added, “Boston did a great job coming back, taking a lead. We got a little discombobulated, but we hung tough, and they kept playing the whole 48 (minutes). Really, really proud (and) happy for them.”

Spurs’ Dejounte Murray wasn’t going to watch the Celtics keep their 7 points with three minutes left on the clock in the final quarter. The Spurs scored the next consecutive 6 points to put off the pressure from them but the Celtic cracked. The Spurs went on to score 16 points in those final minutes and emerged victories.

The man of the match surely goes to Dejounte Murray who scores 26 points out of which 13 came just from the 4th quarter. His clutch jumper with 12 seconds remaining on the clock is just a treat for the Spurs fans.

The Spurs coach was quite impressed with Dejounte Murray’s game and complimented him during the press conference. he said, “Defensively, nobody could stop Dejounte Murray,” Boston coach Ime Udoka said. “He got some 1-on-1s and made some tough shots over pretty much everybody. So, he kind of picked his spots.”

This win was imperative for the Spurs to break the defeat cycle that was created. We can only hope that the Spurs will continue this impressive performance. The Spurs will face the Washington Wizards on Monday. The match is going to be tough as the Wizards are one of the best teams this season and are currently 12-7 in the team. 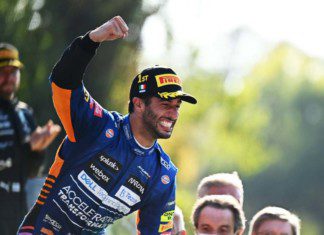 Justin P Joy - January 26, 2022
The 2021 season saw a McLaren driver claiming a GP win after their 9 year long wait thanks to their ever-smiling Australian Daniel Ricciardo...