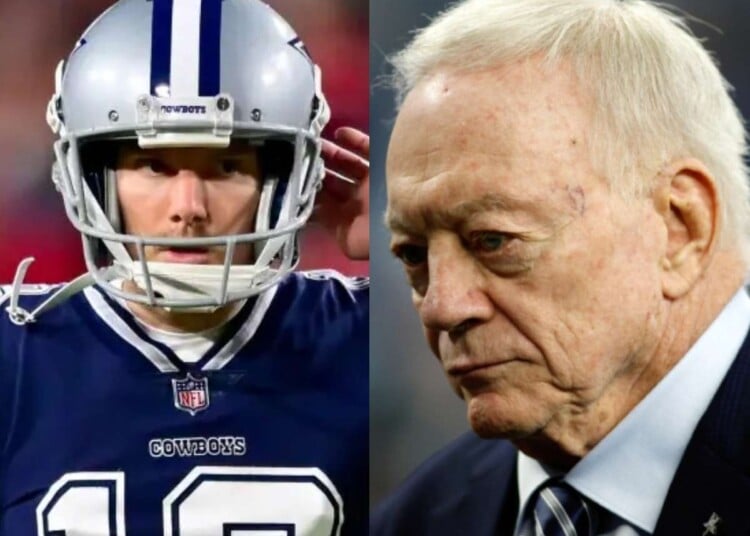 Brett Maher has been the Cowboys’ place-kicker for quite some time now and has been completely reliable in clutch situations. However, the Cowboys kicker had the worst game of his career and even set an unlikely record when they were against the Bucs for the wild-card playoff game.

Maher missed four kicks for the Cowboys in a row, making it one of the worst performances by a kicker ever. The Cowboys kicker was the only weak link in the team as they dominated the Bucs in their own territory.

The Bucs won the game comfortably with a score of 31-14. However, the 33-year-old was scrutinized by many NFL analysts who took shots at him for having a bad game.

Amidst this, a tweet in the name of Cowboys owner Jerry Jones was doing the round on twitter mid-game. The tweet read: “if you can kick and are currently in the stadium right now come on down to the field we got a jersey for you.” While of course this was the fake account and not the original Jerry Jones account poking fun at the expense of Cowboys kicker, this was evident to tell how miserable a game was for Brett Maher.

Nonetheless, the ‘real’ Cowboys owner spoke about the situation extensively and shared his views on the placekicker’s future with the team on radio 103.5 ‘The Fan.’

“Make no mistake about it we got to have the same week of preparation,” Jones said. “Now, over to our kicker. This is a classic case of looking at what he’s done for this team and done on the field all year, not just last night,” Jerry Jones stated on radio 103.5 ‘The Fan.’

Maher’s future with the Cowboys may be in jeopardy after a dreadful performance against the Bucs. However, a win against them has certainly helped him.

Read Further: “Pi**ed the team off,” 49ers HC Kyle Shanahan discloses the turnaround time which motivated the team in their DECISIVE playoff win against the Seahawks

Will Brett Maher start against the 49ers next week?

The Cowboys have qualified for the next round of the playoffs and are set to face the 49ers. There’s still speculation surrounding Brett Maher’s future with the team and if he will start the game against the 49ers.

The 33-year-old kicker has taken a huge hit in his confidence after missing multiple kicks in a single game and the hate from social media has also not helped his case.

Regardless, Jerry Jones believes that he will look at things one day at a time and won’t make any rash decisions regarding Maher’s future. “Kicking is a technical thing. It has everything to do with the.. just frankly mentally having it all together when you step up there,” Jones stated. “And, so, we’ll read this thing as the week goes along. I don’t want to get out over skis and get ahead of it.”

The Cowboys will meet the 49ers at Levi Stadium in California. The 49ers are a stronger team than the Bucs and pose a greater threat than them. Missing useful kicks will not be tolerated in that game and Brett Maher will have to be sure about that.

Read Further: Brock Purdy earns the respect of NBA icon LeBron James after leading the 49ers to a late-game win against the Seahawks

Read Further: “They had us in the first half” – Jaguars fans ECSTATIC after they erase 27-point deficit to complete 3rd largest comeback in playoffs history