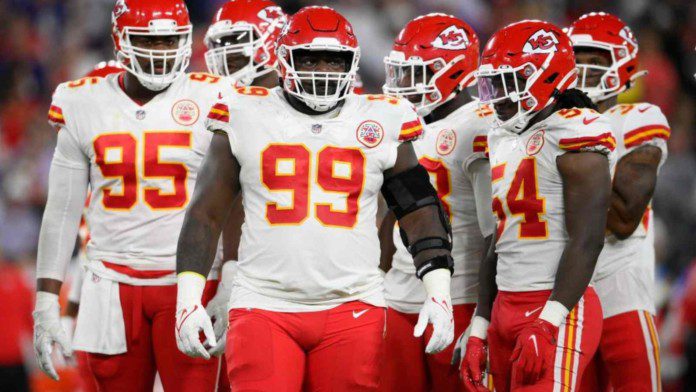 The Kansas City Chiefs have locked up the #2 seed for the 2021 NFL playoffs. They finished with a record of 12-5 and comfortably took another AFC west division title. Andy Reid has coached the team to another successful season and they look poised to make another super bowl run over the coming weeks. They aren’t without their flaws, however, in particular, their defence.

Related: Chris Broussard thinks ‘the Kansas City Chiefs are going to win’ but warns them to not tempt fate with Big Ben and the Steelers

What is going wrong with the Kansas City Chiefs’ defence?

Throughout the season the Chiefs defense ranks 8th in points allowed, 12th in rushing yards allowed and 5th in total turnovers. Those numbers are not bad at all but where Chiefs fans start to worry is that the defense has given up the 2nd most yards per play and 6th most passing yards in the league. What’s more worrying is what has happened over the last 4 weeks of the season.

428 total yards were given up to the Chargers of which 192 yards came on the ground. They were able to sneak away with a victory in overtime but the offence doesn’t always bail them out as evidenced by their week 17 loss to the Bengals. 475 total yards and 415 of those were through the air as well as 34 points given up. At this point, we’ve seen them be run all over and then thrown over. Their week 18 matchup against a poor Broncos offense should have been the opportunity to right the ship and gain some momentum going into the playoffs. Instead, they gave up 191 yards on the ground and 24 points in a game where the offense only showed up in moments. In the end, the defense won the game with a scoop and score to take them over the hurdle but the signs are concerning for their potential matchups in the postseason.

Their first matchup is with the Steelers who they played in the 4 game stretch to close out the season. That was the one game that actually went well as they gave up 303 total yards and had 3 turnovers. The offence showed up for that game too as they took a comfortable 36-10 win.

It’s not hard to expect a similar game to happen again in the wild card round it’s the divisional round where their problems begin. In all likelihood, they will either face the Bengals again or the winner of the Patriots and Bills. The Bengals have already shown why they are a force to be reckoned with against the Chiefs. The Bills have done the same too but in a more convincing fashion. In week 5 the Bills traveled to Arrowhead and absolutely demolished KC, winning 38-20. The Chiefs defense gave up 436 total yards and  315 passing yards. They also couldn’t force a single turnover while the offence gave up the ball 4 times.

With how their defense is currently playing, they’re going to need Patrick Mahomes and co. to actually show up this time around. Their other matchup is with the Patriots and they are a team that likes to run the ball. They rank 8th in total rush yards and 2nd in rushing touchdowns. They also have the 4th most first downs gained by rushing plays. They’ll definitely be looking to exploit what has been a weakness in KC for the past few weeks.

Steve Spagnuolo’s career hopes rest on the playoffs and what the #Chiefs defense is able to accomplish. https://t.co/zP0LcLaztJ

The picture that is currently being painted is one that seems similar to last season’s Super Bowl. In that game, the Chief’s defense couldn’t hold serve against Tom Brady and the Bucs and their offense simply would not get going. At the end of the day, a team is always going to depend on its strengths but what makes a championship team is one that can find ways to win even when its strengths are lacking. The Chiefs simply have to find a way to limit teams more this postseason otherwise one game in which the offense is lackluster will be enough for their super bowl run to end.

Also read: “I would vote him for the MVP”- Top Sports Analyst points out the player behind Bengals franchise turnaround

“.. are my favorite sports beside tennis” Novak Djokovic gets involved...