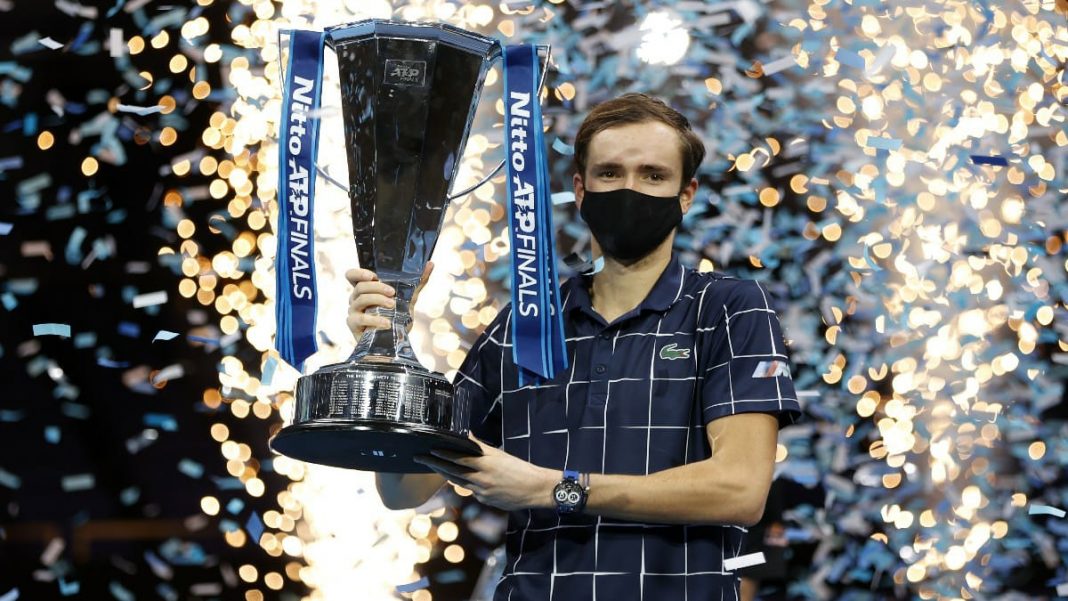 World No. 4 Daniil Medvedev outlasts Dominic Thiem to win the Nitto ATP Finals 2020 title. The Russian won the thrilling three-setter 3-6, 7-6(2), 6-4. Medvedev went unbeaten in the entire tournament and bagged the ninth and by far the biggest title of his relatively young career. This was Thiem’s second finals loss in a row.

The last final at the O2 Arena, after a 12-year stay at the venue, was a thrilling affair right from the start. Thiem fought a spirited Medvedev in the first set, 4-6, to give himself the ideal start in the final. Medvedev again started the second strongly with but Thiem didn’t let the Russian amass any kind of lead. The set went to a tiebreaker and Medvedev bulldozed Thiem by winning 7 points in a row to win the set and level the playing ground.

The final set of Nitto ATP Finals London 2020 began with a bang. Medvedev wore down the Austrian in the set to win the match and bag the title.

Dominic Thiem gets off to a perfect start

Medvedev started the final with a commanding tone. He delivered some good serves early on and took the lead 1-0. The second game bought the best out of the players, with Thiem coming out on the top after a lengthy deuce. Medvedev came back stronger in the next game. He used massive forehand shots and deadly aces to retake the lead 2-1. The closeness of the set continued, as Thiem employed some powerful shots to rattle Medvedev to make the score 2-2. Thiem carried on his momentum and came back from behind to win the next game and take the lead for the first time. Thiem continued to steamroll Medvedev with his strong shots and extended his lead 2-4.

After going on backfoot, Medvedev managed to cut down the Austrian’s lead to 3-4 to stay in the game. Thiem began the next set with some monstrous serves which Medvedev wasn’t able to respond to. Thiem swiftly won the next game to re-establish his 2 set advantage. But Medvedev was not ready to go down just yet, He won the following game 40:0 to make the score 4-5. The Medvedev comeback was stopped in its track by Thiem in the next game. Thiem won the game to win the set 4-6. Medvedev committed some unforced error which eventually costed him the set.

Medvedev topples Thiem in the tiebreaker

The Russian started the second set in the same fashion as the first set, going 1-0 early on. And just like the first set Thiem neutralized Medvedev’s lead and made the score 1-1. Medvedev retook his lead in the next game with a beautiful backhand. Thiem came back stronger in the following game and pegged Medvedev back to 2-2. With little-to-nothing separating the two-players, the next game entered a deuce. The Russian took the advantage again and again only for Thiem to counter it. Medvedev finally won the deuce to go up 3-2. A quick-fire 40:0 win for Thiem in subsequent games helped him equalizing the score 3-3.

Thiem began tiebreaker with aggression, going up 2-0. But Medvedev obliterated the Austrian by winning next 7 points on trot to easily win the tiebreaker.

With the scores levelled at the end of second set, the players went all out to make that final push for the title. The third set began with same heat that the entire match had progressed, with Thiem’s early lead quickly neutralized by Medvedev. Thiem went ahead again to lead 1-2 but Medvedev pulled him back to 2-2 by winning margin of 40:0. The Russian took control of the deciding set after outlasting Thiem in a lengthy deuce. Medvedev extended his advantage to 2 games as he won another deuce to make the score 4-2. Thiem narrowed the gap to 4-3 in the following game.

Medvedev continued his gigantic serves to tire down Thiem and went one step closer to winning the title. With the score set at 5-3, Thiem was hoping make another miraculous comeback. And that comeback looked well on its way as Thiem won the next game to close the gap to 5-4. But Medvedev was in no mood to allow Thiem make another comeback. Medvedev won the next set to win the Nitto ATP Finals title.

Also Read: Dominic Thiem has the best shot to dethrone the Top 3 and become World No.1 – Southampton Manager Ralph Hasenhuttl