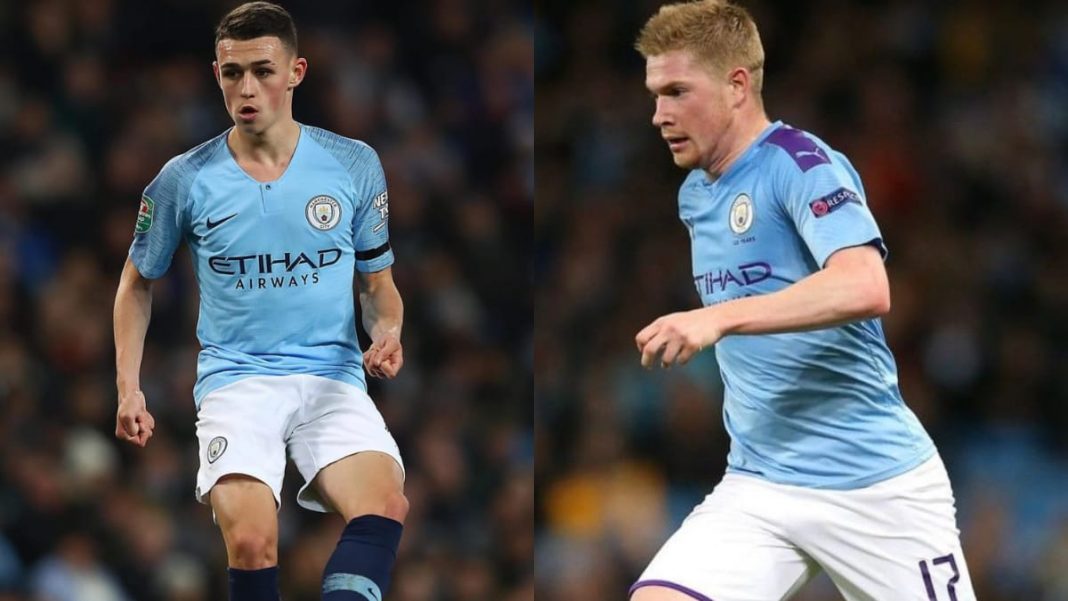 The fight for the Premier League title is heating up with Manchester City sitting at the top of the table with 53 points. The Citizens are looking favourites to lift the title on the basis of their current form as they have won 5 out of their last 5 games. Pep Guardiola has once again left his mark with his intelligent strategic formations which have yielded positive results for the Etihad outfit so far.

The 50-year-old manager will be hoping for his side to maintain consistency. Manchester City has got a fine balance in every department. In this piece, we are about to discuss 5 players who have played a crucial role for the Cityzens so far this season. These players have different technicalities, skill sets, variations in their style of play as well as temperament.

The players mentioned in the list have colluded well with their teammates and have produced a collective performance. Some players have showcased their all-round capabilities as well as defensive solidity while some have showcased their domination with their playmaking abilities, distribution and brilliant finishing. Keeping in mind all these aspects and every player’s contribution we have prepared a list of 5 Manchester City players who have impressed the most this season.

The 26-year-old has been a star playmaker for the Citizens. Sterling’s deceptive pace and skillful dribbles have always been difficult to handle. It’s really amazing to see how he manages to vary his pace depending on the opposition’s game. Sterling like always showcased his domination at the flanks and has showcased his ability to create set pieces quite intelligently.

The forward has scored 8 goals in 21 games so far this season with 6 assists to his name this season. Sterling has also scored 1 goal in 6 Champions League games with 3 assists to his name in the ongoing season. The former Liverpool FC player fits into Pep Guardiola’s formation because of his possession-based style of play. Guardiola had last month stated that Manchester City’s achievements not possible without Raheem Sterling. Sterling has shared a fine understanding with Gabriel Jesus in the forward line as well as midfielders Kevin De Bruyne, Bernardo Silva and Rodri.

De Bruyne is known for his all-round playmaking skills. Whether it is scoring goals through open play or set pieces, De Bruyne has changed the outcome of a game with his creativity and possession-based style of play. The Belgian doesn’t possess electric pace but his control and fine footwork have troubled the opposition.

The 29-year-old has implemented some well-controlled passes with his clever movements to create opportunities from difficult positions. The midfielder has scored 3 goals in 17 games with 10 assists to his name in the ongoing Premier League season. The former Vfl Wolfsburg player hasn’t scored any goal in 2 Champions League games so far but has registered 4 assists so far. Guardiola had last year stated that the Belgian is the best midfielder in the world. De Bruyne has worked well with forwards Raheem Sterling and Gabriel Jesus. His coordination with Ilkay Gundogan has also looked sharp at the flanks.

Like Raheem Sterling, Gundogan has showcased his deceptive speed during open play with brilliant footwork and creative awareness. The 29-year-old can move into goal scoring positions with his smart eye co-ordination. The midfielder has provided enough depth in the midfield and his disciplined marksmanship has added fluency in the midfield.

The German is looking in fine goalscoring form as the midfielder has netted 11 goals in 18 Premier League games so far this season with 2 assists to his name. The former Borussia Dortmund player has also notched up 2 goals in 5 Champions League games so far. Pep Guardiola has stated that the German has proven his faith in him. Gundogan scored 2 goals in the Etihad Outfit’s 3-0 win over Liverpool on 13th February. Gundogan’s teamwork with Kevin De Bruyne and Phil Foden has looked well-coordinated during open play.

The youngster is taking giant strides with every game. The midfielder can build pressure on the opposition with his quick footwork and quick decision making. Playing under Guardiola will give a new direction to the 21-year old’s career which could eventually help him grow as a player.

Foden has netted 5 goals in 18 games so far this season with 3 assists to his name. Foden has also registered 1 goal in 6 Champions League games so far this season with 1 assist to his name. Manager Guardiola had once stated that the youngster is the most talented player he has ever seen. Foden’s form will be crucial for the Cityzens during the dying stages of the season. Foden has had a fine partnership with Rodri and Bernardo Silva in the midfield.

Walker has shown tremendous rigidity and solidity in defence. The 31-year-old has been at the heart of Manchester City’s defensive set up. The former Tottenham Hotspur player has been dominating the opposition attacks with his muscular tackles and timely interceptions.

The England international has been a busy player on the field and his ability to attack as well as defend as per the situations has added a lot of reliability in defence. Walker has also scored 1 goal in 16 Premier League games so far this season with 1 assist to his name. Walker is also a fast mover during set-piece situations which also makes him a dangerous scoring option. Guardiola had stated that Walker’s signing was an incredible inclusion for Manchester City.

Also Read: 5 best midfielders in the Italian Serie A