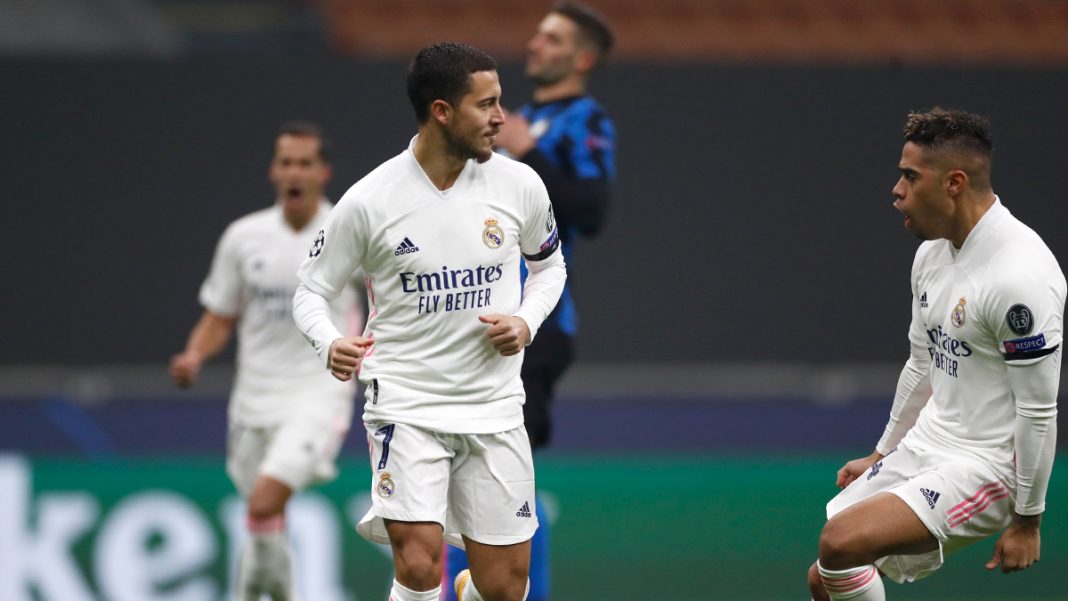 Real Madrid sealed all three points at the San Siro as they qualify for the knockout stage of the UEFA Champions League. A 2-0 win over Inter Milan with goals from Eden Hazard and Rodrigo guarantees their qualification.

However for the Nerazzuri downfall to the UEFA Europa League looks almost certain. Read more about the match events below.

Real Madrid were playing in a 4 2 3 1 formation with Modric and Kroos as the two deep lying midfielder’s. Odegaard was playing as the AMF in the formation.

The Spanish side got an early advantage as Nacho was fouled in the 6th minute. Eden Hazard stepped up to score his first champions league goal since 2017.

Inter Milan hardly had any sight of the ball as Zidane’s side kept possession easily with Lucas Vasquez rattling the post once. Inter Milan’s sorrows kept on adding as Arturo Vidal was shown a red card after a fight with the referee over a potential penalty.

He was shown two yellow cards and off he went restricting Inter Milan to 10 men.

Both teams looked to make changes as Zidane brought on Rodrigo and Antonio Conte brought in Ivan Perisic. The Nerazzuri did try and make a comeback but that was crushed as Rodrigo secured a goal seconds after coming on.

Lucas Vasquez’s cross is deflected off Hakimi and is actually being registered as an own goal by UEFA. Hazard did have a wonderful chance to make it 3-0 but was unable to do so.

Ivan Perisic came close to scoring a compensation goal for the hosts but fired wide. Thibaut Courtois was called into action late in the match but managed to keep his clean sheet.