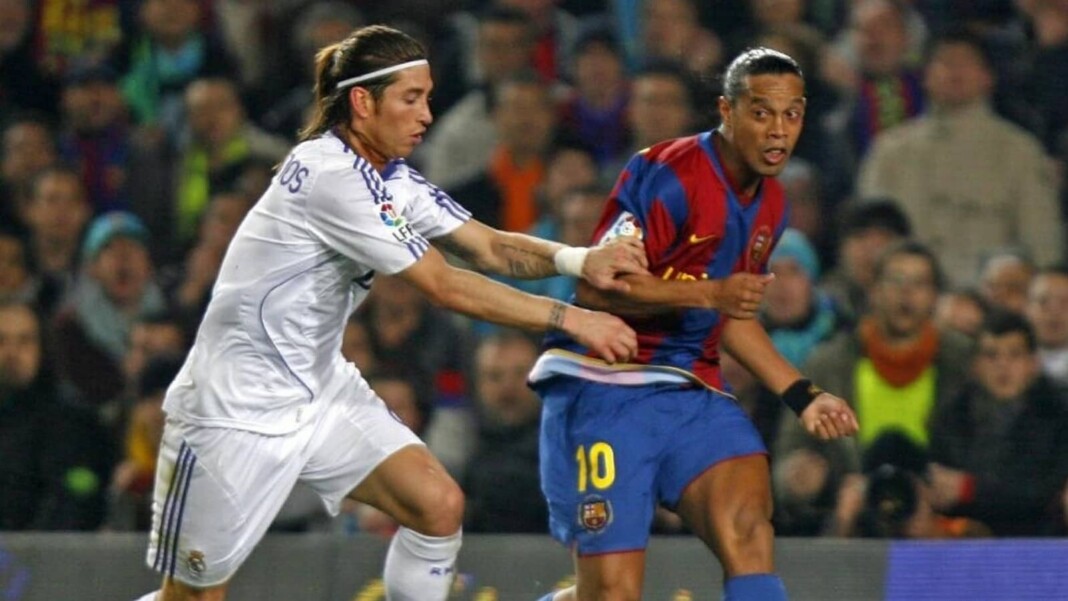 Brazilian fan favourite Ronaldinho Gaucho decided to involve himself in a bit of banter on Twitter as he took a dig at departing Real Madrid centre-back, Sergio Ramos. Posting a picture of the two legends in action, the former footballer was referring to the match where his magic was on full display at the Santiago Bernabeu. The Brazilian scored twice and left Ramos grasping at thin air several times during the match as the Real Madrid defence failed to cope with his enchanting dancing feet.

The altercation brought back memories of the El Clasicos of yore, which was the most awaited fixtures of the footballing world. At least twice a year, fans of the sport from across the world would watch on with bated breath as two of the most elite clubs in the world fought it out over ninety minutes.

The two players in question have faced off five times during their times at the club, and their clash always produced for an entertaining watch. In the most legendary of these, the Brazilian left to a standing ovation from the Madrid faithful as he dazzled one and all with his unstoppable runs: the one which he was referring to in his post. Fans were denied of many more such meetings when the Barcelona ace left the sunny Catalan summers for Italy.

While it was clear which match Ronaldinho was referring to, the picture he posted was from a different match: one in which Los Blancos came out on top. In the same league season, Real Madrid went on to win the league after finishing level on points with their eternal rivals. Ironically, the match in question ended up deciding who the champions were as Real edged it ahead of Barcelona on head-to-head factor. Their second meeting of the season ended in a 3-3 draw courtesy of a hattrick by young Lionel Messi.

The exchange: What was said

“Hey @SergioRamos – remember this night?!” was the caption of the post. This quickly became viral as the fans of the player reacted to the post in comments and retweets, and caught the attention of the defender himself.

Ramos replied in a brilliant fashion as he put up a picture of the Real Madrid victory parade which was held in celebration of the Los Blancos winning the La Liga that season. “I do… but this one a few months later was way better” the defender captioned his post. He is currently a free agent and looking for a new club next season after he was too late to accept Real Madrid’s contract extension.

This social media dialogue later led to the players agreeing to a FIFA 21 match on Sunday. This will be streamed live on twitch by gaming channel Gamers Without Borders at 2:00 pm GST on Sunday.

Sergio Ramos, whom many consider one of the greatest players of our generation, has left Real Madrid after sixteen trophy-laden seasons. The Los Blancos experienced no shortage of success during his time at the club, most notable of this being a three-peat of the UEFA Champions League. After contract renewal talks with the club fell through, Sergio Ramos became available on the market and is now available to be signed on a free transfer.