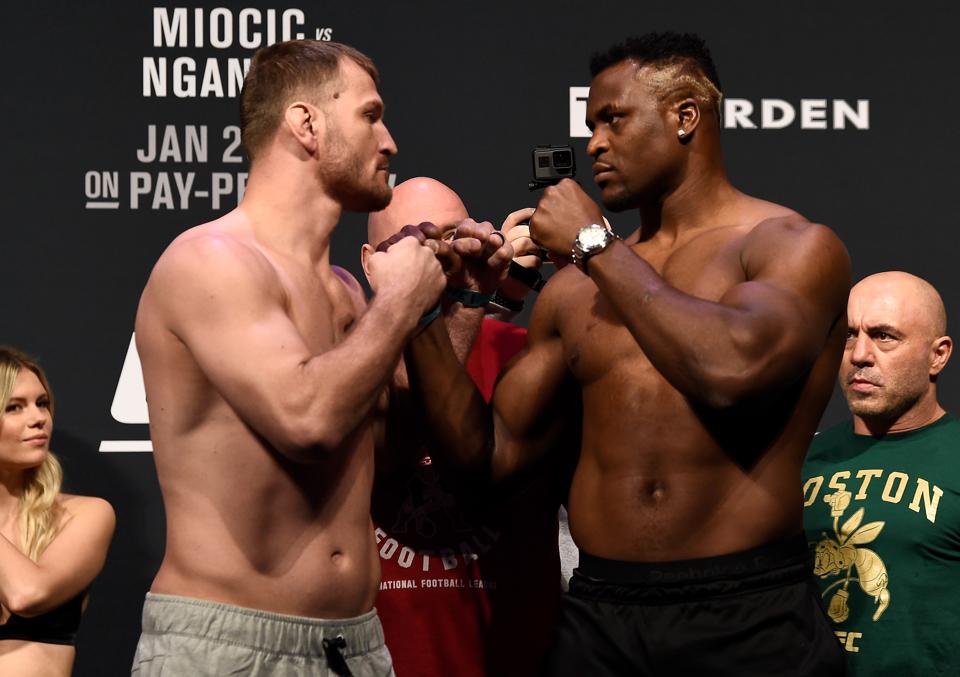 There is no doubt that the first fight between Stipe Miocic and Francis Ngannou in 2018 was iconic. Ngannou has proved that he is ready to fight for the UFC Heavyweight title one more time. The two met first at UFC 220 when Miocic defeated Ngannou and won via unanimous decision.

After being humbled at the title fight, Ngannou set out to avenge his embarassing defeat and rise to the top one more time. He has knocked out 4 of his last 4 opponents. Names like Curtis Blaydes, Cain Velasquez, Junior dos Santos, and Jairzinho Rozenstruik who are known as top heavyweight contenders. His last fight, against Rozenstruik ended in 20 seconds of the very first round, handing Rozenstruik his very first defeat.

Ngannou all set to get his 2nd title shot

After the trilogy between Stipe Miocic and Daniel Cormier, Dana White made it clear that Ngannou is next in line. Stipe defended his belt against Cormier after a brutal fight and won via decision.

In a recent interview, Ngannou asked for the fight against Miocic at UFC 256 after Usman vs Burns got cancelled.

“I requested for December 12, which is the last pay-per-view of the year. Almost over two months from now and i’m expecting to have that date, “The Predator” said.

“Work a lot on my game and get a better training camp,” Ngannou said. “And that will definitely not happen again. When I look back to that fight, I see a lot of opportunities that I could have had if I really was well prepared.”, after being asked about his preparation.

With Usman vs Burns out of the equation, this could be the match up that could save UFC for its last event of the year. However, Stipe Miocic is yet to make a comment at this. After his trilogy fight against Cormier, it could also be that Miocic would want to take the rest of the year off.

Do you think Ngannou would get his shot at the title at the end of the year?

Also Read: “There’s one in November and one in December-I already told the UFC I was in-“-Tony Ferguson is available for UFC 255 or UFC 256 and so is his opponent