A Ukrainian Paralympian, Yevhen Bohodayko, is all set to auction off his 2020 Tokyo gold medal in order to support the armed forces during the current Russian invasion of Ukraine. As violence continues to plague Eastern Europe, several efforts are being made to raise funds for the armed forces amidst this war.

Bohodayko became Paralympic champion and won a gold medal at the 2020 Tokyo Paralympics in the men’s 100m breaststroke SB6 category. The medal will fetch a hefty sum that will be used as funds for the armed forces. According to the mirror.co.uk, Bohodayko will also volunteer with is local non-combat forces.

“If you need help, get involved”: Paralympian Yevhen Bohodayko to help Ukraine by auctioning medal

In a recent interview, Paralympian Bohodayko said that he was eager to help his country against Russia. “I respect that the athletes are raising their hats for the Ukrainians. Nobody can sit with their hands clasped,” he said praising fellow athletes as well. “Now, at such a folding hour for our country, we are becoming stronger. We are a nation, a tougher nation! Victory is upon us! Everything will be good. If you need help, get involved.”

Also read: “I am not welcome because I am Russian”- ISSF President unwelcome at 2022 European Shooting Championship 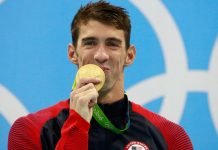 “Who am I?”- Michael Phelps on how therapy helped him accept his depression and anxiety

“People don’t care once the Olympics are over”: Olympic Champion Erin Jackson talks about struggles after returning home

“Everything is possible tomorrow”: Carlos Sainz sends a clear message that...

Riddhi Mondal - May 21, 2022
The Spanish Grand Prix Qualifying Session saw a spectacular performance from both the Ferrari racers as Charles Leclerc took over the pole position with...

“So many stupid things come out of America” :Bernie Ecclestone not...