Aryna Sabalenka, second seed at Australian Open 2022 produced a comeback from the top draw to book a place in the second round. Sabalenka defeated the Australian, Storm Sanders in three sets, as she was a set down and a break down in the second set.

Eventually, Aryna Sabalenka won by a score-line of 5-7, 6-3, 6-2 at the Rod Laver Arena on Tuesday night. The Belarusian was nowhere close to her best in the opening exchanges, as Sanders was roared on by the home crowd.

However, in the end, Aryna Sabalenka’s class reigned supreme as she started making fewer unforced errors. One huge problem for the second seed would be the number of double faults to her name in the first round. She had a total of 12 double faults to her name this season, and 37 unforced errors, which on any other day and other opponent could have resulted in a loss.

Aryna Sabalenka slow to get off the blocks, but gets the job done

Aryna Sabalenka was trailing 3-1 in the second set, after having lost the opening set. It seemed curtains for the second seed, as Sanders was just three games away from winning the first round encounter.

However, Sabalenka got her act together and played some unbelievable tennis. The world number two served seven aces, whereas, the Australian served only two aces. Sabalenka could win just 67% of her points on first serve, and 72% on second serve.

Sabalenka broke her opponent on seven occasions, whereas, she was instead broken on five occasions. The Belarusian won 99 points in the whole match, whereas, Storm Sanders won 89 points. This has been quite a challenging start to the year for Sabalenka, as this was her first win in 2022, after losing two first round matches. 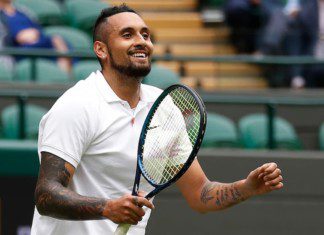 Sarthak Shitole - May 12, 2022
World No. 78 Nick Kyrgios is currently on a small break from tennis and enjoying life at home having been busy in the initial...