In a battle of big forehands, Matteo Berrettini will be up against Spanish teen sensation Carlos Alcaraz in the third round of the 2022 Australian Open. Berrettini is ranked No.7 in the world while Alcaraz is the World No.31.

Italian Matteo Berrettini is known for his ‘hammer’ forehands but he hasn’t been at his best off late. He started the season at the ATP Cup where he lost 2 matches and won 1- where he beat Frenchman Ugo Humbert in straight sets. In the Australian Open this week, he played a tough first round match against American youngster Brandon Nakashima and won it coming from a set down. In the second round, he got the better of yet another American, Stefan Kozlov. He won the match in four sets 6-1,4-6,6-4,6-1.

His opponent, 18-year old Carlos Alcaraz has been exceptional this week in Melbourne. He ended the 2021 season with a victory at the NextGen Finals and is looking in tremendous shape this year. In the first round, he blasted past Alejandro Tabilo in straight sets before yet another straight sets victory over Serbian Dusan Lajovic 6-2,6-1,7-5 in the second round. He seems to have worked out a lot physically during the off season and is looking better than ever.

This will be the second meeting between the two. Alcaraz leads the H2H 1-0. They met at Vienna last year where Alcaraz won in three sets.

The match is very well poised to be a thriller. Both men have very similar hard hitting baseline game. They are probably two of the hardest hitters on the current tour and hence defense will be the key. Berrettini will be the favorite on paper but his current form is a matter of concern. On the other hand, Alcaraz has surprised everyone with the level at which he’s playing. Expect fireworks in the match and it can go down the distance. Alcaraz could very well upset Berrettini given his newly found big serve.

Prediction: Alcaraz to win in 5 sets.

Also read: Spanish government warns Novak Djokovic, asks the Serbian to lead by ‘example’ like his rival, Rafael Nadal and get vaccinated 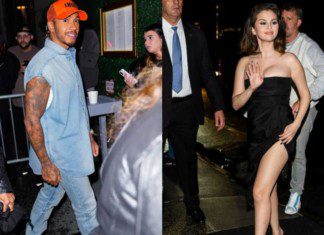 Rishika Saha - May 15, 2022
Lewis Hamilton has made the headlines yet again this time, for a completely different reason. He has been spotted together with Selena Gomez in...

“I want to be back battling at the top,” Sergio Perez...