In the fourth round of the Australian Open 2022, World No. 15 and the 14th seeded Simona Halep will play against World No. 61 Alize Cornet.

Simona Halep continues her fantastic form as she takes down another opponent in straight-sets to reach the 4th round of the Australian Open for the 7th time in her career. Halep defeated Danka Kovinic 6-2, 6-1 in the 3rd round, her 3rd straight-set win. Halep is yet to lose a match this year and is now 8-0 coming into the clash against Cornet.

Alize Cornet is back in the second week of the Australian Open for the first time since she reached the 4th round in 2009. Cornet defeated Tamara Zidansek 4-6, 6-4, 6-2 in the 3rd round. She had earlier defeated 3rd seeded Garbine Muguruza in straight-sets to pick one of her biggest career wins. Alize is now 3-2 in the 2022 season having dropped one set this week as compared to Halep’s 0.

This will be the 5th meeting between the duo with Cornet leading the head-to-head tie 3-1 against Halep.

Looking at these numbers and considering their form in the 2021 and the little of the 2022 season, it will be an uphill task for Cornet to take down the in-form Halep who has looked flawless so far this week.

Also Read: Amanda Anisimova CONSOLES Naomi Osaka says, “She has had a TOUGH last year and I kinda feel for her today” 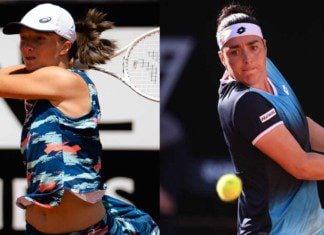 Prateek Sinha - May 15, 2022
Iga Swiatek is currently on a 27-match winning streak, and she faces Ons Jabeur, the winner of the Mutua Madrid Open, for a title...