In the third round of Australian Open 2022, World No.15 Simona Halep will take on World No.98 Danka Kovinic.

Simona Halep is a Romanian professional tennis player. Her current ranking according to the WTA is World No.15 and her highest ranking was World No.1. She has 23 titles to her name out of which two are Grand Slams. She participated in the WTA Melbourne Summer Set 1 and won the finals by defeating Veronica Kudermetova with a score of 6-2, 6-3. In the Australian Open 2022, she won the second round by defeating Beatriz Haddad Mala with a score of 6-2, 6-0.

Danka Kovinic is a Montenegrin professional tennis player. Her current ranking according to the Women’s Tennis Association is World No.98 and her highest ranking was World No.46. She participated in the Adelaide International 2 tournament and was defeated by Maddison Inglis in the round of 32. In the Australian Open Danka defeated Emma Raducanu in the second round with a score of 6-4, 4-6, 6-3.

This will be the second meeting of the duo. In their first meet, Simona defeated Danka. So their head to head stands at 1-0.

Simona has played and won against Danka which will be an advantage for her in the match. Also she has more experience in winning major titles as compared to Danka.

Danka on the other hand has given exceptional performance in the first and second round. She also defeated Emma Raducanu, the defending US Open champ, who was one of the main competitors of the tournament. Expect a thrilling encounter with Kovinic testing Halep, but the Romanian should prevail on experience.

Also Read – Which is faster? Tennis serve vs Badminton smash 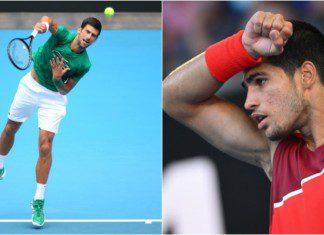 Sarthak Shitole - May 10, 2022
World No. 6 Carlos Alcaraz is one of the most in-form players this season and his trophy cabinet is the justification for it. With...