Novak Djokovic’s VISA has been canceled by the authorities at the Melbourne Airport. According to the orders, Novak Djokovic should leave Australia today itself.

Novak Djokovic will go back home

Novak Djokovic after being given a medical exemption flew down to Melbourne to participate in the Australian Open 2022. However, world No.1 was interrogated by the border police at the Melbourne Airport.

After two hours of interrogation, Djokovic was detained in an isolated room. Where he wasn’t allowed to meet his team and his mobile phone was taken away from him.

However, after being locked for nearly 6-7 hours in detention Djokovic was informed that his VISA WAS CANCELLED and he has to go back home.

According to Australia’s Health Minister Greg Hunt, “Djokovic has failed to provide ‘appropriate standards of proof’ to enter the country and that he will be sent home”

In a report by The Age, Novak Djokovic failed to provide evidence supporting his vaccine exemption and also an erroneous visa application. These were the two main issues due to which Djokovic’s application was rejected by the authorities at the Melbourne Airport.

Djokovic the 9-time Australian Open champion made his way to Melbourne to defend his title for the fourth consecutive time. Due to the Covid-19 safety measures in Australia, the world No.1 came to Melbourne with a Medical exemption.

However, the Serb wasn’t able to provide the required documents to the authorities at the Melbourne Airport due to which he had no choice but to return back home and give up his three-year title run at the Australian Open. 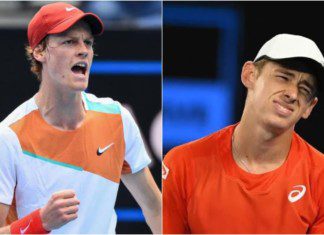 Sarthak Shitole - January 24, 2022
11th seed at the 2022 Australian Open, Jannik Sinner reaches his first-ever quarter-final at Melbourne Park as he takes down the local boy and...