Former tennis legend believes the recent loss of top ranked player makes the game more competitive as it gives confidence to the opponents. 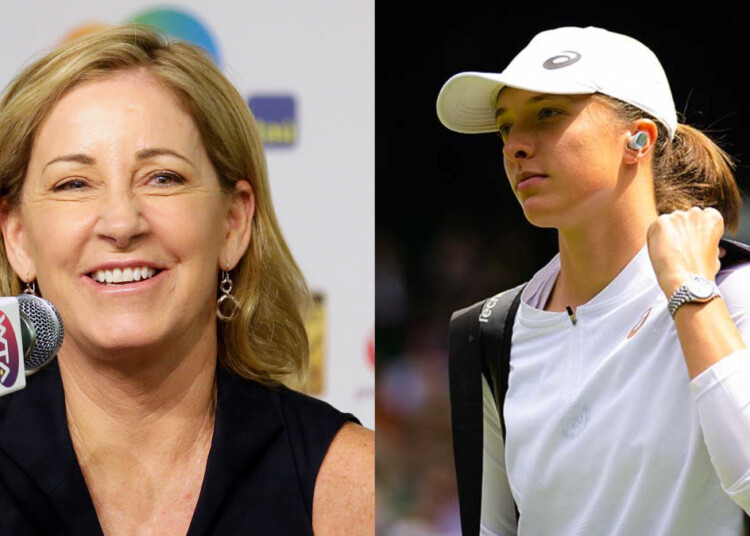 Former tennis star Chris Evert believes that the recent loss of World No. 1 Iga Swiatek in the United Cup gives the game a much-needed balance. In her first tournament of the season, Swiatek got off to a rocky start when she lost to Jessica Pegula in the inaugural edition. Swiatek could not take the defeat well and burst into tears on the court.

For the last couple of years, 21-year-old Iga Swiatek has had an unmatched record. Swiatek created a 37-match winning streak last season, the longest on the WTA Tour in the twenty-first century, putting her far ahead of her competitors in the game. 2023 was expected to be no different for the three-time Grand Slam champion.

“And anytime a No. 1 player loses, it gives the competition hope,” said Evert. The 68-year-old believes the loss also gives Swiatek a chance to reflect and work to regain confidence.  “I think what really matters is how Iga feels more so than how her opponents feel. Because Iga’s got to get back on top. And she’s got to get back that mentality and confidence,” she elaborated.

“If she has that confidence that’s bad luck for the field. Because when she’s confident, and she’s aggressive, she’s really, really tough to beat,” Evert continued.

At the same time, the loss gives other players a chance to see the vulnerable side of the World No. 1 Evert acknowledges. ”But in saying that, yes, it works the other way too, the other players can see that she’s human and that she isn’t perfect. She’s not dominant, she will have off days. And they will have hope when they walk on the court with Iga,” Evert further explained.

Tennis legend Chris Evert believes the season’s first Grand Slam has its own charms that other majors don’t have. It gives everyone a chance for a fresh start, regardless of their performance in the last season. The feeling of the new year adds to the excitement Evert feels.

“The first major of the year is always interesting,” said the 18-time singles major champion. “Everyone’s fresh mentally, everyone’s healthy injury free. They’re all eager and excited to start the new year well, and you don’t know what kind of hard work they put in the off-season. And so it’s like everybody has a clean slate,” Evert added.

The Australian Open is one of the most highly anticipated events on the calendar. The Open is where the pace of the Tour is set under the peak summer of the Southern Hemisphere which tests the resolve of the players fighting for glory. As for the fans, the Australian Open gives them a chance to engage in a thrilling fortnight under the crystal clear blue skies of Australia.