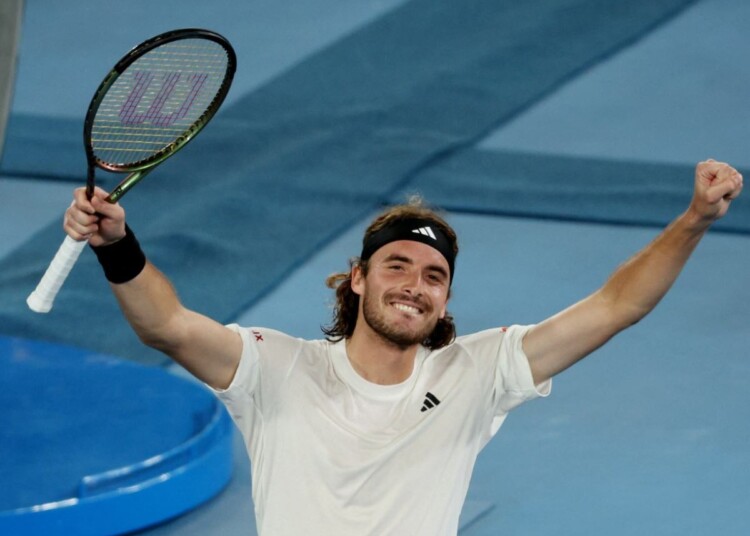 Stefanos Tsitsipas defeated Czech player Jiri Lehecka in the quarterfinals of the 2023 Australian Open and joined some legends of the game in breaking two records. One of those records he became the first to reach since tennis legend Roger Federer.

Tsitsipas is the youngest male player to reach three consecutive semifinals of the Australian Open since Roger Federer did it between 2004 to 2006. He also joined some more legends on another record-breaking list. Tsitsipas is the fourth male to stay unbeaten in his first six Grand Slam quarterfinals. The first three were Rod Laver, Patrick Rafter and Andre Agassi. Good company to be in. The only thing separating Tsitsipas and the others is that they won Grand Slam titles, something he is yet to do.

Federer won the Australian Open title twice during that 2004-2006 run. Tsitsipas has crashed out at the semifinal stage in the past two years. But with most of the favorites out of the tournament, this time might be different for the Greek. Tsitsipas is the highest-ranked player left in the tournament. He faces 18th seed Karen Khachanov in the next round. And he will fancy his chances. Tsitsipas has won every match the two have played. He will look to extend that record on Friday.

In a testament to his consistency, Tsitsipas’ win was also his sixth in as many times of asking at a Grand Slam quarterfinals. The small number of players who have done that shows just how rare an achievement it is. The Greek player has now won his fourth Australian Open quarterfinals. His other two wins have come at the French Open. He got as far as the final at the 2021 French Open, his best performance to date in a Grand Slam tournament.

But if he continues the way he is playing, Tsitsipas is sure to go all the way soon. The World No.4 was dominant in his quarterfinal win.

Related: Stefanos Tsitsipas extends cheeky invitation to Margot Robbie to watch him at the 2023 Australian Open

The next set was much different though. With both players doing brilliantly on their service game, the set was finely poised at 5-4 for Lehecka. Any mistake from Tsitsipas in his service game would have meant Lehecka would even things at 1-1 in sets. But he survives it to take it to the tiebreak. He dismantles Lehecka there, conceding just two points.

The third set is run-of-the-mill in the beginning. But at 3-3, Tsitsipas saves three break points and wins the game. It represents a turning point. Lehecka just is not able to fight anymore as Tsitsipas pulls clear and wins 6-4 to progress to the semifinals.