WATCH: Frances Tiafoe gets stood up for a clap by Taylor Fritz and pat the latter on his head 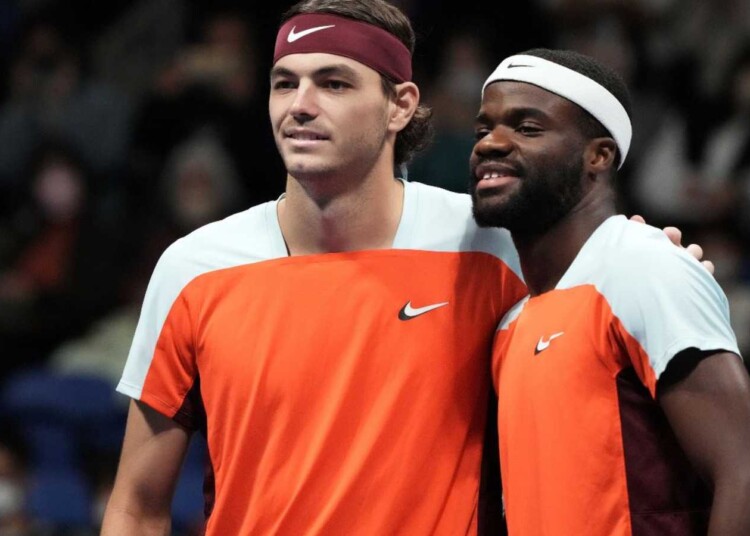 Taylor Fritz and Frances Tiafoe continued their camaraderie on the courts of Ken Rosewell Arena, Sydney, Australia, where both the players are participating in the United Cup 2023 for Team USA. It so happened that after taking a lead 2-1 in the tie-breaker, against the Czech pair of Jiri Lehecka and Marie Bouzkova, American pair of Taylor Fritz and Jessica Pegula, were sitting in their team dugout.

Meanwhile, Frances Tiafoe came up to them to give a pat. While, Jessica Pegula gave him a pat, the World No.9 was lost in his thoughts. When the World No.19 asked him for a pat, Taylor Fritz did not respond. Hence, Frances Tiafoe gave a pat on Fritz’s head and the whole dugout began laughing.

Taylor Fritz shared a small clip of this incident on social media with a funny caption.

Meanwhile, the pair of Jessica Pegula and Taylor Fritz won the match against the Czech pair 2-6, 6-3, 10-7. Team USA won their Group-stage match against Team Czech Republic 5-1.

The World No.9 is very happy to play with the top American ranked players on his side at the United Cup in Australia. The US team is ranked No.3 after Team Greece and Team Poland. It boasts some of the top players in the ATP and WTA rankings. Jessica Pegula (World No.3), Madison Keys (World No.11) and Frances Tiafoe (World No.19) are part of this team besides Taylor Fritz.

A lot will depend upon Jessica Pegula and Taylor Fritz. Both the players have to set the positive momentum with both Tiafoe and Keys chipping in.

“I think we have a great team.Hopefully we can win it. Hopefully Taylor, Jess and Madi can carry me. It’s easy to compete when it’s not about you,” Tiafoe said in a press conference.

“It would have been nice to have more time to dive back into the new season but I’m ready to go. It’s always fun to start with a team competition. We have an extremely strong team,” the World No.9 said who is also fancying his chances to win the Australian Open 2023.

The US Team is drawn in Goup C with Czech Republic and Germany. They have won their match against Team Czech Republic. They will have to take on a strong German team to advance into the next stage of the United Cup.

Related: “The Australian Open is not going anywhere”, Victorian Government shuts down claims of the Grand Slam moving to China