WATCH: Taylor Fritz gets infuriated by spectator’s disturbing shout costing him the set against Novak Djokovic 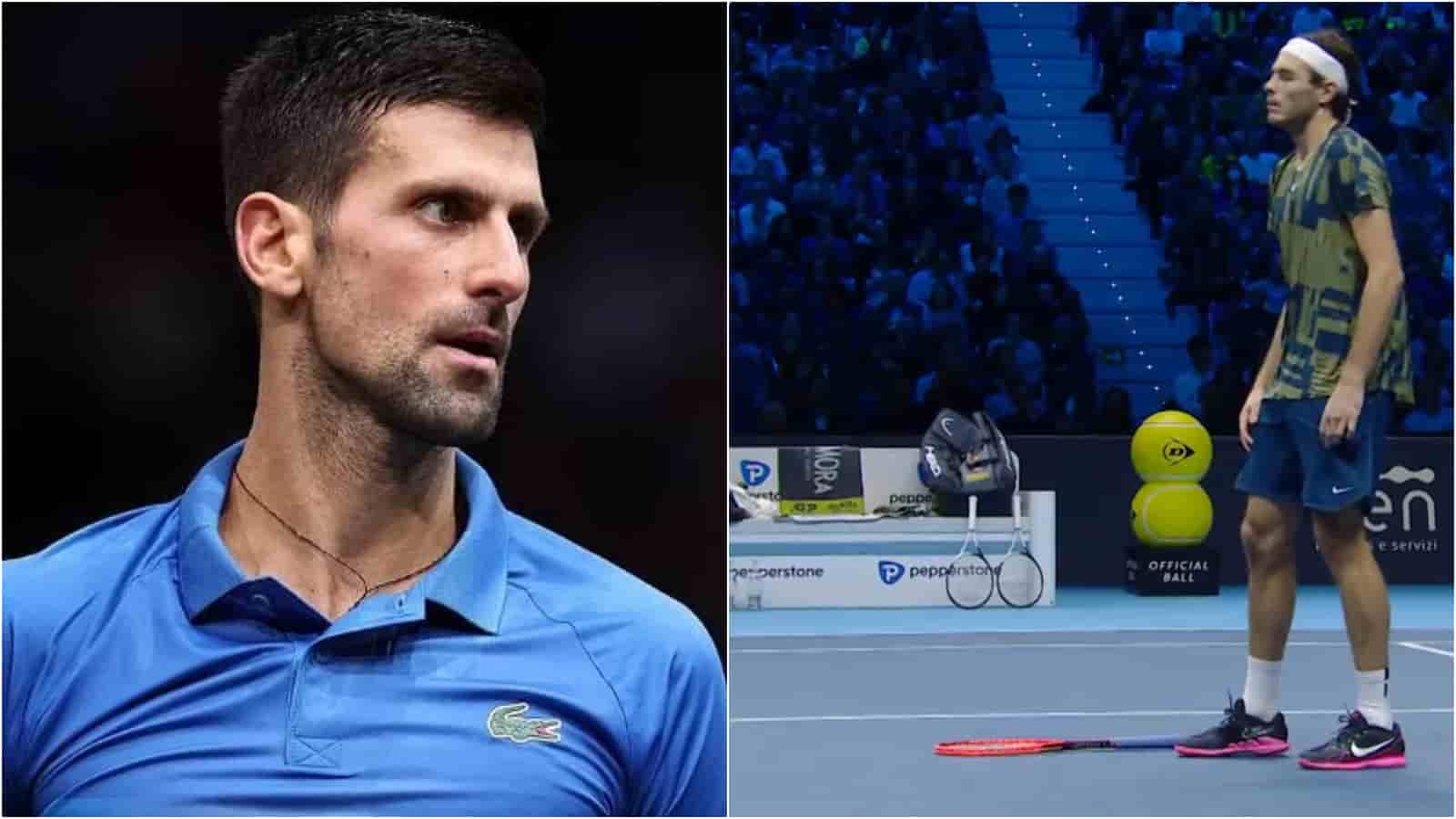 Taylor Fritz stunned the world last week when he beat the 2022 French Open champion, Rafael Nadal, in his first Group stage match in the 2022 ATP Finals. The world could not believe it further when he advanced into the semi-final round, along with Casper Ruud from the Green Group.

He was looking good in the semi-final match against Novak Djokovic, too. He was able to dominate the match in the first set and was on the brink of winning that set until he blew it up.

It so happened that the World No.9 was dominating the second set at 5-4. He had already lost the first set but was looking determined to win this one. The points soon tied at 30-30 and Fritz was serving for the second set. A spectator shouted fairly loudly as he prepared to hit a backhand into the open side of the court to set up a set point with a winner along the line. Fritz’s backhand, however, sailed into the net, awarding Djokovic a break point in its place. After that point, Taylor Fritz was incensed and expressed his dissatisfaction with the audience’s behavior.

“This was tough. There was drama as Taylor Fritz looked to serve out the second set against Djokovic…” The American sports broadcaster Tennis TV posted small footage of the match with this caption.

There was drama as Taylor Fritz looked to serve out the second set against Djokovic…#NittoATPFinals pic.twitter.com/6HFMJdQFBe

In the post-match interview, Taylor Fritz shared his own opinions about the incident.

“Someone just like flat-out screaming to like purposely try and throw you off – it’s not something you’re ever used to. So when it happens, it’s an absolute shock. It’s disgusting man,” he said.

On the following point, Fritz’s backhand went long, further infuriating him, and Djokovic eventually broke into the American’s serve. Djokovic continued to take the second set in a tie-break to win the match 7-6 (7-5), 7-6 (8-6).

Taylor Fritz did not qualify for the 2022 season-ending prestigious tournament. He was ranked as World No.9. Everyone, including himself, thought that his 2022 season is over after he lost against Gilles Simon in the second round of the Paris Masters tournament. But an unfortunate injury to Carlos Alcaraz in the semi-final round of the competition led to his withdrawal from the ATP Finals. The American got entry into the prestigious tournament as Seed #8.

He made the most of his chance as he was able to defeat some of the biggest names in the sport and reached the semi-finals. However, this loss against Novak Djokovic will hurt him because he could have won the set and taken the match into the third set.

“Now is probably not the best time for me to give a good answer for the reflection of the week because I’m extremely upset about the match, more so about the things that happened in a match that I can’t control,” he said in the same interview.

On the question of what can be done when such an incident occurs or whether replaying the point is an option, Taylor Fritz conceded that there are no such rules and it would be not in the right spirit of the sport if it is allowed.

“What can you do? If you make a rule that you can replay the point, then the guy’s just going to yell when I’m about to win a point, and then we’re going to have to replay and it’ll happen the reverse way. I can’t expect anybody to be like, ‘replay the point,’ because in that situation I can’t say that I would do that either. I kinda got screwed, and there’s nothing that can really be done about it,” he further answered.

Meanwhile, social media users are questioning whether Taylor Fritz was distracted, or the American is doing drama.

There was drama as Taylor Fritz looked to serve out the second set against Djokovic…#NittoATPFinals pic.twitter.com/6HFMJdQFBe

It was his own fan, shouted “come on”, he thought point was over..

Blame one shout for your breakdowns in important moments 👏👏
Champion mentality!

Should have made that shot regardless it there was noise from the stand or not.

This has happened to Novak like a millions times, but when he got an advantage for such interruption once,
you upload this non sense trying to convey people the message that this is why Djokovic made a come back.
How ugly and hypocritical you can get surprises me everytime

Like, literally, Djokovic played against Federer and 20 000 people numerous times, and won pretty much all of those matches… And I don’t recall you even mentioned that? But you made a special clip about this?! You must be joking! 😄

why was that point not repeated?

Yeah but then Novak had to win the next point. Taylor had a chance to bring it back. Tough but it could have been done.

One point does not win/lose a match.

That was tough, ok. Fritz said “that was disgusting”, ok.
Now image people in your own box screaming talking loudly barking instructions at you & (in)fighting throughout the match, throwing off your concentration & calmness, making you lose your match?! It happened last night.

Please no one screwed you over 😂. There were plenty points after that point that you could have won. If that didn’t happen you still probably could have lost the match so what are you talking about being screwed over Taylor? Jeez, blaming the whole loss on one thing is crazy💆🏾‍♀️😂

It was Fritz fan tho

Taylor Fritz must be proud of his achievements this year. He was able to play the semi-final match at the 2022 ATP Finals is a memory that he will cherish forever. This is the first time, but surely not the last time. We wish to see him play outstanding next year in the Grand Slams and other tournaments.

Also Read: “Really? Just underpants? Come on Wimbledon!” Fans express their fury through sarcasm over the rule change allowing female players to wear colored under shorts in the Wimbledon 2023

Also Read: “Horrible behavior” Martina Navratilova slams the NFL for allowing Deshaun Watson to practice with the Browns despite him not completing his suspension over charges of multiple sexual assaults