Nick Kyrgios is arguably one of the most entertaining players on the tennis tour. The Australian loves to remain in the limelight, and is never shy about expressing his opinion. Kyrgios has been a regular in the Team World since the inception of Laver Cup in 2017.

Nick Kyrgios featured in action during Day Two of Laver Cup 2021. The Australian faced Stefanos Tsitsipas in the first match of the day, where he lost in straight sets. Later, he was involved in Doubles action, where he lost in the match tiebreaker.

Stefanos Tsitsipas had some kind words for his opponent, Nick Kyrgios after his win at Laver Cup 2021. The youngster stated that the Australian was a talented player, and could turn up on his day even without much practice.

Stefanos Tsitsipas defeated Nick Kyrgios in straight sets by a score-line of 6-3, 6-4. The Greek was in impeccable form during his victory as held his seve throughout the match. On the other hand, Tsistipas broke his opponent on two occasions, once each during the two sets.

Speaking in the post match press conference, Tsitsipas heaped praise on Kyrgios and said, “He is someone, with not much practice or preparation, he can come out and play one of his best tennis, due to the enormous talent he has as an athlete,” said Tsitsipas.

Nick Kyrgios was delighted with the kind words showered on him by Stefanos Tsitsipas and thanked him for the same. The Australian expressed his gratitude to Kyrgios on Twitter. Tsitsipas will be seen in action once again on Day Three of Laver Cup 2021, as he faces the tall American, John Isner. 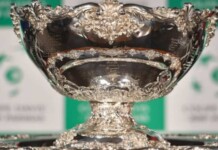