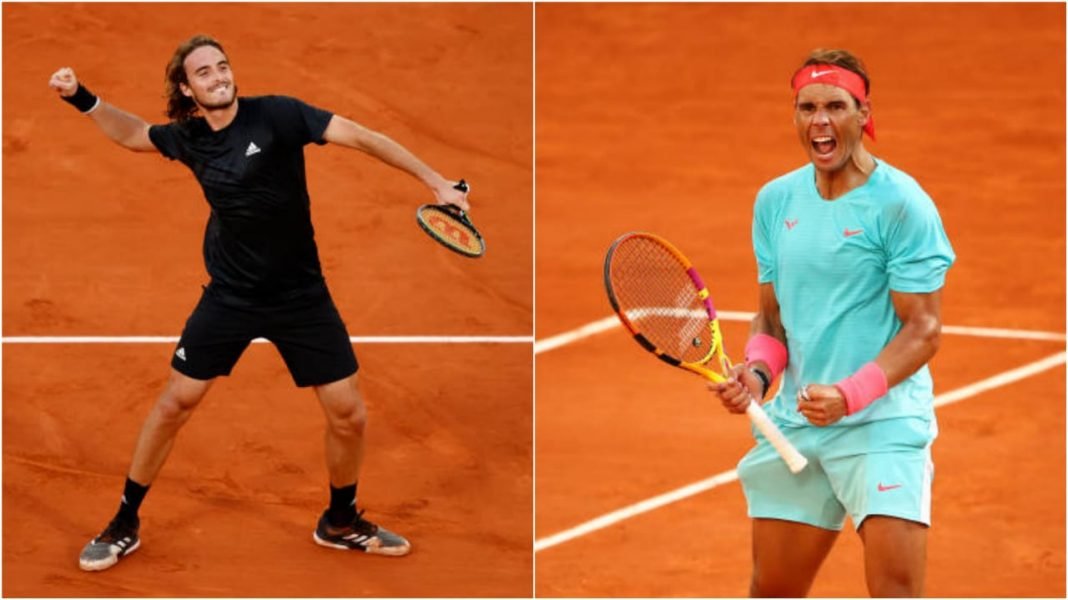 Greek Stefanos Tsitsipas has set his sights on a defeat of Rafael Nadal at Roland Garros as one of his goals for the upcoming 2021 season. He has a 1-6 record against Nadal; his only win against Rafa came at the Madrid Masters in 2019. Moreover, Rafael Nadal’s record at Roland Garros is unparalleled.

The ‘king of clay’ has won the French Open on a staggering 13 occasions, and has an astounding 100-2 record at the tournament. The only two players to have beaten at Roland Garros are Robin Soderling and Novak Djokovic.

But Stefanos Tsitsipas expressed hope of beating the ‘incomparable’ Nadal in Paris. “A really good goal would be maybe to beat Rafa [Nadal] on clay, or at Roland Garros, that would be a really nice goal,” Tsitsipas said recently in an interview with the Roland Garros website. “He’s such a difficult player to play against, very difficult, very consistent, incredible fighting spirit. I consider myself a fighter but he’s completely next level, incomparable. That would be a realistic, I hope, goal, not too much to ask.”

The Greek also gave an insight into what makes the Spanish legend so difficult to beat. He pointed out that Nadal’s heavy topspin is a significant weapon, which combined with his anticipation, agility and fight make him a truly formidable opponent.

“They don’t call Rafael Nadal the most difficult player to beat accidentally, there is something behind it,” Tsitsipas stated. “For me personally, he has a very heavy ball and he is just anticipating very well, very good movement on the court as well. He spins, his agility on the court is very impressive and the way he fights, he’s just never going to give up, that makes him very very difficult.”

‘I want to expand, I want to do greater things, not just in the field of tennis, but also outside of it’ – Tsitsipas

Tsitsipas has had a short but thrilling career so far. His career high so far was his win at the ATP Finals in 2019. He will be hoping to reach his first Grand Slam singles final in 2021. He has reached a grand slam semifinal twice in his career so far, most recently at the 2020 French Open – where he was beaten by World No. 1 Novak Djokovic in a close five-setter.

While most players on the tour are solely focused on their tennis careers, Stefanos Tsitsipas has a wide variety of interests outside the sport. And the Greek hopes to exert his influence beyond the court in the coming years as well.

“I want to expand, I want to do greater things, not just in the field of tennis, but also outside of it,” Tsitsipas said. “And through music, through vlogging, through photography, through building a company, stuff like that… it allows for connecting people, it allows for ideas to be shared.”

“I see it as something so positive, so bright for humanity, for human beings, to just be able to create a space or a place that will allow for humanitarian development as well,” he added.