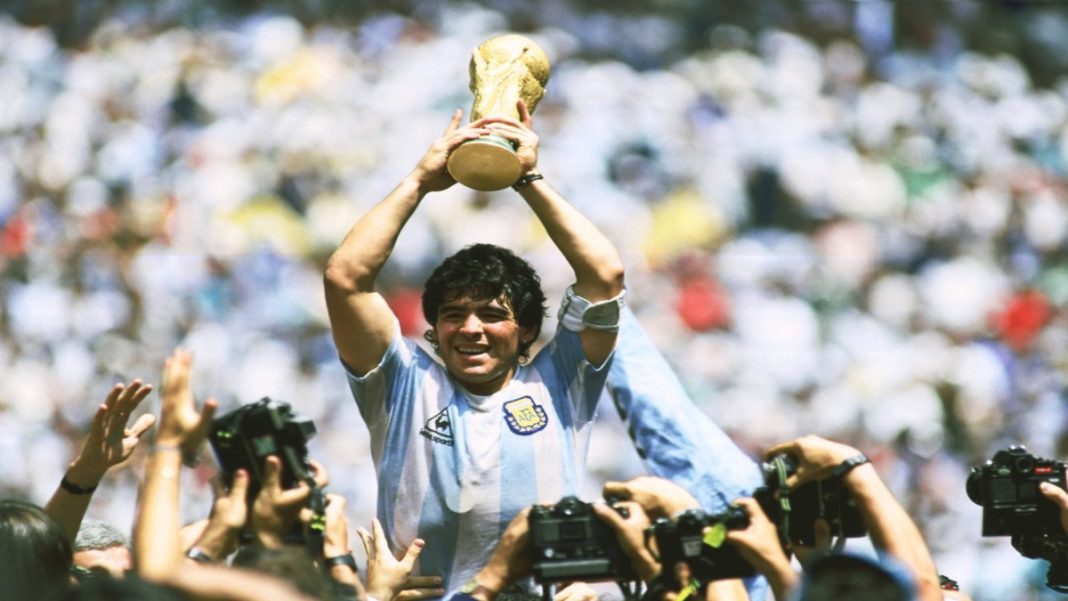 Diego Maradona is rightly lauded as one of the greatest players of all time in football history. His death brings immense sadness to all the football fans across the world. Maradona was known for his unreal dribbling skills and the ability to single handedly beat even the best of teams. Moreover, he also delivered in the biggest matches and won lots of trophies including the World Cup and Serie A.

The most important thing about these titles is that he achieved it with teams which were considered underdogs in Napoli and Argentina. Hence, he is revered as a God by the Argentina and Napoli fans for his terrific achievements. Thus, we take a look at some of the best moments of his legendary career.

The Hand of God

The 2-1 victory over England in the quarter finals of 1986 World Cup consisted of the two most iconic goals by Maradona. The first one was the most controversial as he used his Hand to help the ball above the goalkeeper. England were rightly riled by this daylight robbery but the rest of the world applauded the genius of this little man. Maradona himself stated that the goal was “a little with his head, and a little with the hand of God”.

Moreover, the second goal of this match was even more special and is considered to be the greatest goal of the century. For this goal, Maradona picked up the ball and went past four players and rounded the goalkeeper to help beat England by a score line of 2-1. Thus, the sheer audacity of him to pick apart the whole England team is the biggest testament of his ability.

The World Cup win of 1986 by Argentina cemented Maradona’s position among the greatest football players ever. West Germany were the opponents in the final and they gave a tough competition to Argentina. With the match poised at 2-2, Maradona stepped up and delivered a crucial assist for Jorge Burruchaga to grab the World Cup winning goal.

Hence, he was rightly named as the best player of the tournament and given the golden ball. Moreover, Maradona’s performances in this tournament is also remembered as the greatest by any individual in a World Cup.

The Scudetto win with Napoli

Napoli were graced with the talent of Maradona in 1984 after his transfer from Barcelona. The city of Naples got their savior and together their set their eyes on winning the first Scudetto in the history of Napoli. The day finally arrived in 1987 with Maradona playing the most important role in the victory. He got a whopping 17 goals as Napoli won the Coppa Italia along with the Scudetto.

Moreover, the most striking thing about this title is that Maradona single handedly managed to wrestle the title from the dominance of Juventus and AC Milan. Naples went crazy after this victory and Maradona’s legacy was written that day. In addition, Maradona managed to win the title again in 1990 creating a unmatchable legacy.

Napoli also managed to win the UEFA Cup of 1989 with the help of Maradona’s brilliance. In addition, this was also the first International Cup won the club in it’s history. Maradona played a crucial role in the victory as Napoli beat Juventus, Bayern Munich and Stuggart on their way to the title.

However, the most famous part about the victory was his warm up routine prior to the match against Bayern Munich. He enthralled the audience with some astounding tricks as the ball seemed to be glued to his feet. Moreover, the warm up routine also made us realize just how much talent he possessed in his wand of a left foot. Only Messi could come close to him in terms of talent and left footed magic.