by Niyati
in Badminton, Featured 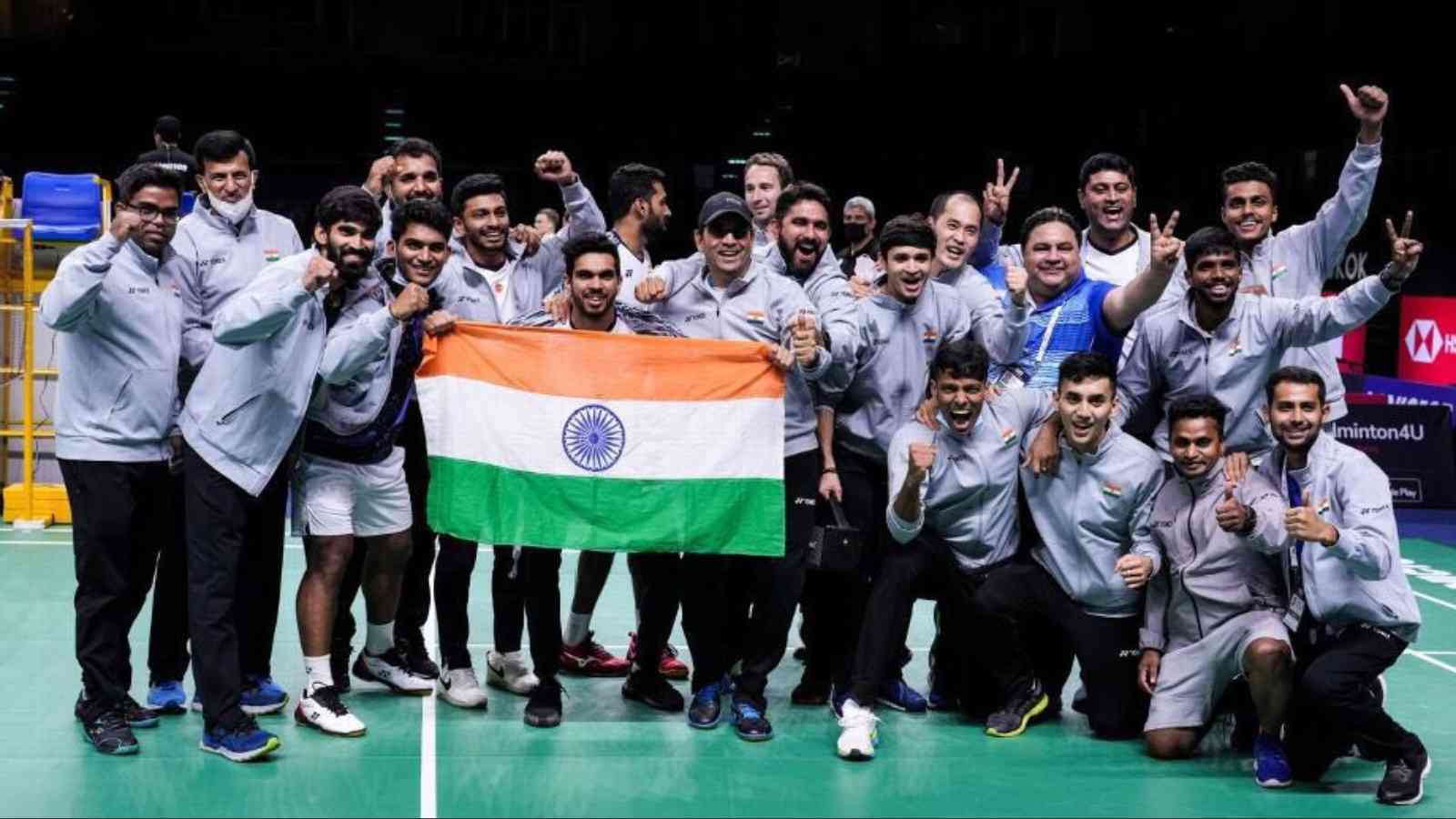 The Indian Men’s Badminton Team won their first ever Thomas Cup title after stunning defending champions Indonesia by a score of 3-0 in the finals.

India became only the sixth nation overall to win the Cup, (also known as the World Men’s Team Championships), a tournament with a history going back to 1949. India had not reached the semifinal stage of the Thomas Cup since 1979 while Indonesia were the defending champions and the most successful country in its history with 14 wins and 7 runners-up medals.

India’s triumph attracted all sorts of ecstatic reactions on social media and beyond with some comparing it to the country’s win in the 1983 Cricket World Cup.

The win and especially the manner of it will be discussed in detail but first we take a short detour.

The point of putting in the above headlines is to show that ‘The Great Indian Badminton Story in the 21st Century’, starting from the days of Saina Nehwal, has always been about slow, gradual improvements. Saina’s sucessor PV Sindhu burst onto the scene by winning two bronze medals in the World Championships of 2013 and 2014. She followed it up with an Olympic and two WCH silvers from 2016-2018 before finally becoming World Champion in 2019.

In fact not just badminton, all of Indian (non-cricket) sport over the last two decades has followed the same general pattern and it’s not hard to see why. Winning a bronze is easier than winning a gold. It is easier to be good than to be great.

India at the Thomas Cup 2022: Breaking the shackles

None of the the players in India’s Thomas Cup team had ever won an Olympic or Asian Games medal. The only 2 World Championship medals came in 2021 in a tournament held at the end of an exhausting season and affected with player withdrawals. Even the 2022 performances of Indian players cannot be called particularly exceptional. The India Open and Lakshya Sen reaching the All England finals were the only notable results of the season.

The Indian squad featured Lakshya, a prodigy tipped for greatness but still not the finished product; Satwiksairaj Rankireddy and Chirag Shetty, a gifted but inconsistent young duo; Kidambi Srikanth, the former World No.1 going through a form slump for the better part of four years; and HS Prannoy, a flawed genius better known for defeating Lin Dan than for winning tournaments. The inexperienced second MD pairings of MR Arjun-Dhruv Kapila and Krishna Prasad Garaga-Vishnuvardhan Goud Panjala and the rookie singles player Priyanshu Rajawat made up the rest of the squad.

At the beginning of the tournament, the possibility of this group of Indian players going beyond the semifinal stage seemed remote. No one including this author gave them a chance of winning the tournament outright. Even if the skill levels of the teams were considered equal, the opponents India faced were simply better at winning.

The aura of chronic underachievement surrounding Srikanth and Prannoy had become so entrenched that one wondered if they could ever break free. Their form had improved in recent months but could they both win match-after-match?

As it happened both Srikanth and Prannoy ended up among the few undefeated players in the entire tournament. As it happened years of incremental improvements were a build-up to one exponential leap of faith.

India’s campaign began with not-entirely-convincing 5-0 victories against lower ranked teams Germany and Canada. The first big test was Chinese Taipei and India managed a respectable 2-3 loss (with wins for Srikanth and Prannoy) and qualified for the quarterfinals placed second in Group C.

So far the script was similar to the 2021 Thomas Cup and a definite improvement over 2018 when the Indian team crashed out in the group stage itself. Also of note is the fact that only once in the history of Cup has a team placed second in its group gone on to win the tournament (Malaysia in 1992).

India’s next opponents were Malaysia – a team who were on a high after beating the formidable Japan.

In the first match, Lakshya lost in straight games to the higher-ranked Lee Zii Jia. But Satwik and Chirag showed why they are so highly rated by beating the other rising MD stars Sze Fei Goh and Nur Izzuddin. Srikanth followed it up by defeating the inexperienced Ng Tze Yong. Aaron Chia and Ee Yi Teo made it 2-2 for Malaysia against India’s second MD pair of Vishnuvardhan and Krishna Prasad. The decider was between Prannoy and Leong Jun Hao and the Indian veteran outclassed the Malaysian youngster in straight games to guarantee a semifinal place and a first-ever bronze for India.

So far so good. But India’s semifinal opponents were Denmark. Pound-for-pound the Danish team was better than the Chinese Taipei team who had beaten India earlier and the Danes had a head-to-head advantage against the Indians.

Lakshya unsurprisingly lost to reigning Olympic Champion Viktor Axelsen in the first match. What happened next was a midsummer dream.

Satwik-Chirag, up against Kim Astrup and Mathias Christiansen, won the first game 21-18 but lost the second 21-23 after squandering two match points. The third game was a see-saw battle in which the Indians lost three more match points before breaking the jinx on the sixth attempt to win 22-20.

Next up was Srikanth who put together one of the greatest performances of his storied career against World No.3 Anders Antonsen. The 28-year old won in three games to give India a 2-1 lead. In the next match however Vishnuvardhan and Krishna Prasad lost to the fancied team of Anders Skaarup Rasmussen and Frederik Sogaard.

The onus once again was on Prannoy against the higher-ranked Rasmus Gemke.

Few would have expected Prannoy to win the match after he injured his ankle on course to a 13-21 loss in the first game. Fewer still would have expected Prannoy to win the remaining two games by scorelines of 21-9, 21-12 after the medical timeout. But that is exactly what happened. Prannoy all but put a seal on the second game after leading 11-1 at the halfway stage. He celebrated every point he won in the third game with the exultation of someone whose latent potential has finally started to bloom. Gemke and the Danish contingent were left awe-struck, and amidst the chants of “HSP! HSP!!”, India had done the improbable.

Srikanth and Prannoy put the (second) wind behind India’s sails but for the finals against Indonesia, it was clear that a win would be difficult without a good result from Lakshya.

Perhaps it was the self-belief he gained by watching his seniors against Denmark but Lakshya never lost composure against Anthony Ginting, even when the latter smashed his way to a 21-8 win in the first game. Lakshya’s defence improved remarkably from the second game onwards. His resolute play prompted errors from Ginting as the match went on. Lakshya won the second game 21-17 and went on to win the third by a score of 21-16 after trailing 7-11 at one stage. Commentators remarked that Lakshya’s performance in the latter part of the third game was the best badminton he had played in his short career. If there ever was an example of rising to the occasion, this was it.

Team championships such as the Thomas and Uber Cups should ideally hand out Player of the Tournament or MVP Awards. Only such an award can do justice to the way Satwik and Chirag carried the Indian team throughout the tournament. In the finals they faced Mohammad Ahsan and Kevin Sanjaya Sukamuljo each of whom forms one half of two legendary Indonesian teams, the ‘Daddies’ and ‘Minions’ with Hendra Setiawan and Marcus Gideon respectively. This scratch pairing could still give most other teams a run for their money.

The ‘Daddinions’ won the first game 21-18 but the Indians came back with almost an air of inevitability. That Satwik-Chirag bounced back after being four match points down in the second game should not surprise anyone who had followed the team’s trajectory in the 2022 Thomas Cup. Near-impossible odds tend to crumble when faced with unshakable determination. The Indians went on to win the second game 23-21 and the third 21-19.

Then Srikanth landed the final blow against Jonatan Christie and that was that.

A billion people were in raptures.

Method to the magic

Passionate Indonesian fans should not be too harsh with their team despite the 0-3 loss. From the pace and aggression of Ginting to the skill and artistry of Ahsan-Sukamuljo to the audacious shot played by Christie to get to game point in the second game, the Indonesian team clearly gave it their all.

But neither they nor most Indian supporters were prepared for the magnitude of India’s resilience. It was as though each and every point progressively fortified the team with a Teflon-coated shield of self-belief.

So said Prannoy in an interview before the finals: “We arrived in Bangkok 10 days ago with full faith in this team and knew how far we could go with this team in such a tournament. That belief was the major factor where things started to turn. I’m extremely happy that we could be in the finals after 73 long years and it’s a huge achievement for all of us because we’ve always wanted this.”

The team realized that they were all in peak physical and mental shape for the upcoming Thomas Cup: “Srikanth and I had a discussion a couple of months back saying we just need to try. We never try fully and need to give it our all to go ahead..I spoke to Lakshya too. We shared a room when he was at the All England Open and I told him we really need to try at this year’s Thomas Cup. He said, ‘Yes we need to try bhaiya, this looks like the best chance for us.“

Such meticulous planning and pitch-perfect execution has rarely been seen in Indian sporting history.

Where does this team go from here? How will it respond to challenges posed by traditional powerhouses China and Japan and fast-rising teams Thailand and Chinese Taipei? And then of course is the matter of India’s declining graph in the Uber Cup. But those questions are for another day.

For now all of India should rejoice in an inspirational triumph that has gone beyond sport.