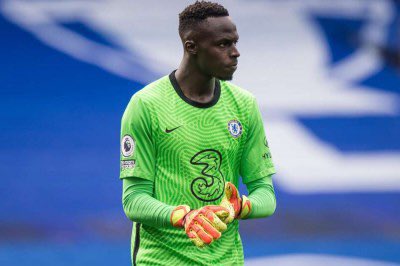 Chelsea boss Thomas Tuchel has confirmed that goalkeeper Eduoard Mendy remains the number one choice for the club.
Kepa Arrizabalaga made a rare start in the Premier League against Newcastle United which surprised a lot of fans.

In a surprising turn of events Kepa Arrizabalaga started against Newcastle United which took the Chelsea fans by surprise. However Kepa Arrizabalaga did a fine job and kept a clean sheet along with some good saves During the match.
However coach Thomas Tuchel has confirmed that despite him starting, Eduoard Mendy will remain as the number one choice for the club. Mendy has been extremely good for Chelsea this season and is crucial for their success.

Chelsea will be visiting Southampton FC in the Premier League on Saturday in what will be a tough fixture for them. However the main challenge comes a week later when they face Atletico Madrid in the UEFA Champions League round of sixteen.

“I don’t know [how close Kepa is to challenging Mendy to be No1]. Nothing has changed and Edou is the No1,” Tuchel said during Friday’s pre-match press conference.
He deserves to be the No1 and this is a sensitive position where you need to be clear and you cannot hide. You cannot hide your opinion in the press conferences and, of course, not in the dressing room. Things have to be clear and you cannot be afraid of it – and we are not.