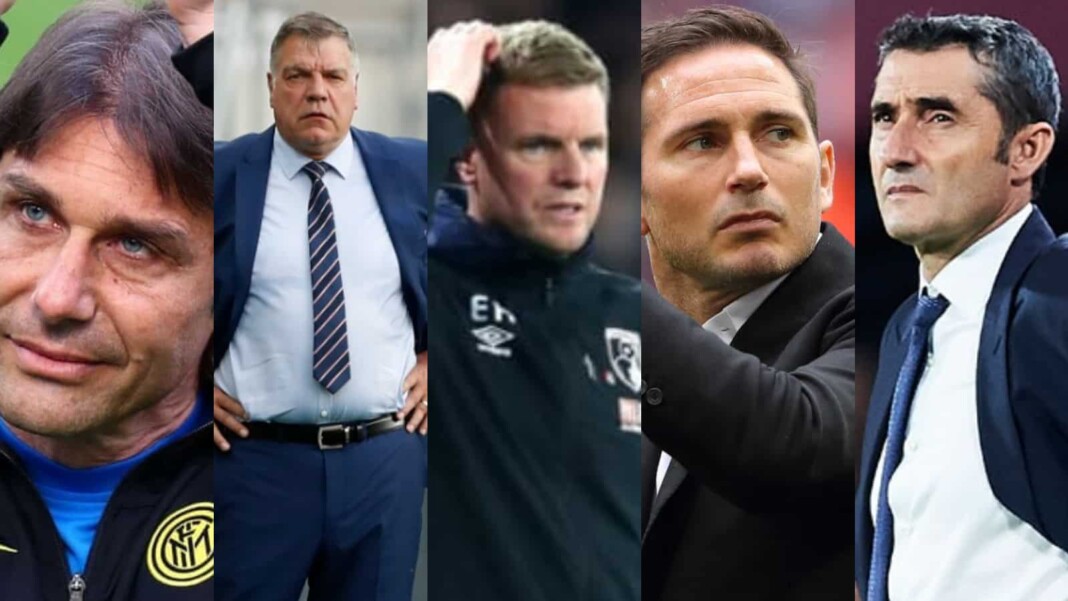 Many highly regarded managers have been dismissed, quit their roles, or have yet to join a new club after finishing their last management duties in recent seasons.

On that point, here are five of the Top 5 football managers who are unemployed at the moment

Frank Lampard signed a three-year contract with Derby County on May 31, 2018. Derby won 2–1 away at Reading in his debut game as manager on 3 August, with Tom Lawrence scoring a last-minute winner.

Lampard led Derby to the Championship play-offs in his first season as manager, after helping the team finish sixth in the 2018–19 Championship season. Derby overcame a 0–1 home setback to beat Leeds United 4–2 away in the play-off semi-finals, winning the tie 4–3 on aggregate and advancing to the final against Aston Villa where Derby was defeated 2–1 by Aston Villa in the play-off final.

Lampard managed Derby County in all competitions for 57 games, winning 24, drawing 17, and losing 16. That gave him a very good victory percentage of 42.1 percent. Derby finished sixth in the Championship, having won 20 of their 46 games, drawn 14, and lost 12. Derby won 13 league games at Pride Park, but they also won seven on the road.

The Rams scored 69 goals while allowing 54 in 46 league games, proving to be a superior defence than Norwich, West Bromwich Albion, and Aston Villa, all of whom ended higher in the standings.

Lampard was extensively connected with the vacant management position at former club Chelsea at the end of the season. Derby permitted Lampard to meet with Chelsea officials about the post on June 25, 2019. Thus, on 4th July 2019, Lampard joined Chelsea on a three-year contract.

Lampard finally led Chelsea to fourth place in the Premier League and the FA Cup Final, where they were defeated by Arsenal. Chelsea completed five big additions in the summer transfer window the next season, spending over £200 million in total, the highest of any club in the 2020 summer transfer window. Chelsea got off to a fast start, topping both their Champions League group and the Premier League in early December.

However, following a run of two victories in eight Premier League games, Chelsea fell to ninth place, and Lampard was fired on January 25, 2021. Thus, after a successful stint with both Derby and Chelsea, Lampard is a favourite and teams may look up to him.

Antonio Conte was named coach of Arezzo in Serie B in July 2006. However, after going winless in his first nine games, he was quickly dismissed by Maurizio Sarri. However, Sarri failed to make any progress, and Conte was reinstated as a coach. He then guided the club to five successive victories, earning 19 points from seven matches, allowing the Tuscans to narrow the points deficit between themselves and safety.

However, after a turnaround in the tournament, the side was demoted to Serie C1 which led to his exile. He joined Bari who play in Serie B on 27 December 2007. Conte got his first major honour when under his leadership Bari were crowned champions in 2008-09 and were promoted to Serie A for next season.

On 21 September 2009, Conte replaced Gregucci and despite a good start they were found struggling which lead to protests. Due to repeatedly confrontation with Atalanta fans, he resigned from the club.

He then became the head coach at Siena for a year. His next stop at Juventus proved to be a successful one, as he achieved several milestones in his first ten months, including a victory against rivals Fiorentina. Later, he became the first coach since 2004 to lead Juventus to a Coppa Italia final. His revolutionary 3-5-2 shape provided the players, especially Andrea Pirlo, freedom, which was crucial to the team’s success. They won the 2012-13 Serie A with 87 points. However, after being eliminated from the Champions League, he resigned on July 15, 2014. During his three seasons, he earned the Panchina d’Oro as the best Serie A coach of the season three times.

After the resignation of their manager, Cesare Prandelli, he joined Italy a month later. He committed to a two-year contract extension till Euro 2016. Although many supporters were sceptical of his methods at first, he subsequently received media plaudits for his defensive strength and tactical approach. His tenure as manager came to an end when Germany defeated the squad in the quarterfinals of Euro 2016.

His latest contract with Inter Milan ended 26 May 2021, despite performing well and achieving glory at Serie A. As Conte has experience with many clubs and with his defensive strength and tactical approach, he makes for a good manager till now.

Ernesto Valverde’s reputation may have suffered as a result of how he was fired by Barcelona and the circumstances surrounding the sacking.

Despite being unemployed for over a year, there is little dispute about his management background. Ernesto Valverde is one of the most seasoned top-flight managers, having been in charge for over two decades.

Even at Barcelona, the Spaniard produced two league titles, notably the one in 2017-18, when Barcelona nearly ended the season undefeated. Valverde was named UEFA La Liga manager of the year in 2015-16 for his work with Athletico Bilbao.

During his two-year stint with Barcelona, he had an excellent winning % of 66.90 and averaged 2.23 points per game. Outside of Spanish football, Valverde had considerable success with Olympiacos, when he twice won the double.

Despite being fired by Barcelona, Valverde maintained positive relationships with all of his players and staff. However, consecutive Champions League losses to AS Roma and Liverpool turned the supporters against him. Nonetheless, it won’t be long until the Spaniard is back in charge of a top-flight team.

Allardyce began his coaching career as a player-manager in the League of Ireland, guiding Limerick to the second-tier title in 1991-92 before moving to Preston to take up the number-two position. In July 1994, he took over as manager of Second Division Blackpool, who had survived relegation to English football’s fourth tier by a single point after the previous season. They finished 12th in his first season and third a year later, but Allardyce was fired after a play-off semi-final defeat by Bradford.

When Allardyce arrived at Notts County in January 1997, he inherited a team that had battled during the first half of the season, and he was unable to keep them from sliding into Division Three. He did, however, lead the team to promotion as champions with 99 points at the end of the next season.

His efforts at Notts County aided in his hiring at Bolton in October 1999, and it was there that he began to build his name. He took Wanderers to European qualifying for the first time in the club’s history after guiding them to the Premier League at the club’s second try.

As then-chairman Freddy Shepherd wanted stability, Allardyce was viewed as the guy to put a halt to the revolving door at St James’ Park. However, his reign at Newcastle was cut short after only 24 games when new owner Mike Ashley decided to give angry supporters what they wanted and replaced him with Kevin Keegan. Rovers were in the Premier League relegation zone when Allardyce came in December 2008, but Blackburn finished the season in 15th position, which was a relative comfort. They finished 10th in his first full season as manager, but new owners Venky’s fired him in December 2010.

Allardyce returned to the game almost six months later, in June 2011, with relegated West Ham, and led them back into the Premier League via the Championship play-off final. His style of play did not meet the expectations of Hammers supporters, and after finishing in 10th, 13th, and 12th position in the top division, the club parted ways in May 2015.

Sunderland were still seven points from safety at the start of January, having been tasked with pulling off another spectacular escape after Dick Advocaat’s departure in October. Only champions Leicester defeated them after February, as Allardyce avoided relegation from the Premier League.

His time at Bolton was spectacular. He took some genuinely talented players who were too old, too troublesome, had lost their spot, and so on, and got them to play wonderful football at Bolton. Over the last several years, he’s earned a reputation as a firefighter, rescuing clubs on the verge of relegation and keeping them afloat. He has a knack for getting the most out of small teams.

Eddie Howe, once regarded as one of England’s finest managerial prospects, has been out of work for more than a year.

Bournemouth were a little-known institution outside of the UK until Howe took over as caretaker manager at the age of 31 in 2008. Down in League Two and beset by financial difficulties, Howe was obliged to make do with very little resources. The South Coast club started the 2008-09 season with -17 points but miraculously avoided relegation under his leadership.

After a brief stint at Burnley, Howe came home and led Bournemouth to the Premier League for the first time in their history in 2014-15. It was a tremendous feat for a club of their stature. What was even more remarkable was Howe’s ability to maintain them in the top flight year after year, even earning their best-ever eighth-place result in 2016-17.

Unfortunately, it would not endure forever. Bournemouth’s five-year run in the Premier League came to an end in 2019-20 due to poor recruiting with big-money recruits and a leaky backline. Shortly later, Howe and the club mutually decided to split ways. It was a difficult choice for Howe to leave the club where he had spent a combined 25 years as a player and manager.

Celtic had waited for Eddie Howe for a long time, deferring discussions until the summer at his desire. But the 43-year-old shocked everyone when he revealed he would decline the chance to take over the Scottish giants. Because of the fast-paced and ever-changing nature of English football, Howe will almost certainly not be out of employment for long. If a manager is fired after a bad start to the season, he will be one of the names drawn from the hat.