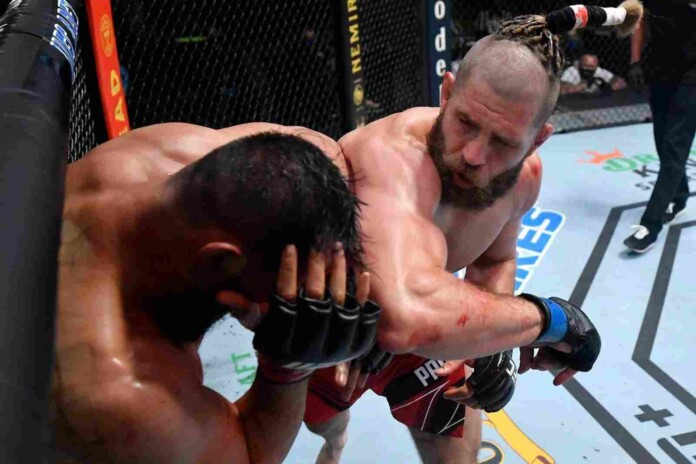 UFC Vegas 25 main event fight introduced us to a new contender for the light heavyweight division. Jiri Prochazka knocked out Dominick Reyes in the second round with a vicious spinning elbow that put him out cold. The UFC stars couldn’t handle their reactions and let it out on Twitter.

The UFC Vegas 25 main event could not have gotten any better. Dominick and Jiri fought their heart out at the first round giving everything they had. Jiri Prochazka’s chin came in handy for him as he took a couple of brutal knocks but ended up still standing on his feet. In the second round Prochazka put Reyes in the corner and put him to sleep with a spinning elbow with just 30 seconds left for the round to end.

Twitter explodes as Jiri knocks out Reyes at UFC Vegas 25

UFC welterweight champion Kamaru Usman who himself shocked the world at UFC 261 last week was blown away by what Prochazka did to Reyes. “Damn that was madness,” he wrote on Twitter.

Former two-division champion and UFC broadcaster Daniel Cormier was very actively letting his thoughts known to the world about the UFC Vegas 25 main event fight. Cormier has high hopes for Jiri. “This dude Prochazka is like a avalanche going downhill. He just blitzes these dudes. He uses his cardio as a weapon, has a fantastic chin and great finishing instincts. I’m very excited about this dude!” DC wrote.

UFC’s heavyweight contender Derrick Lewis is relieved that he does not have to face Prochazka at the 205 division. “Damn good luck to you guys at 205 Prochazka sheesh,” wrote the black beast.

Aljamain Sterling and Megan Anderson were not shy to give props to Jiri Prochazka after his knockout of Dominick Reyes. The Bantamweight champion wished Reyes a speedy recovery.

The ‘BigMouth’ Kevin Holland was funny as usual and is ready to sport Jiri Prochazka’s hairstyle for his next bout.

Anshuman Mahapatra - May 14, 2021
England quick Jofra Archer was ruled out of the Indian Premier League (IPL) 2021 owing to a wrist injury. During the India tour of...