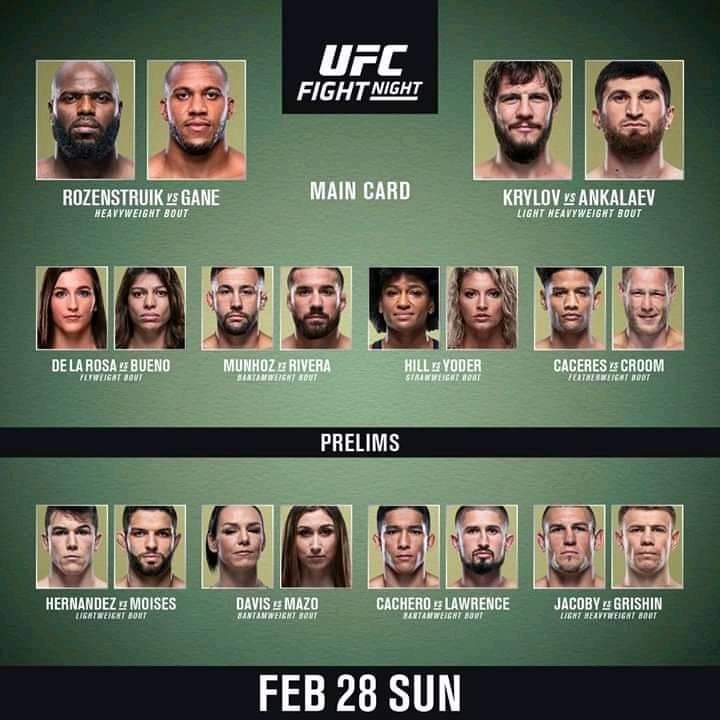 Top ranked heavyweight Jairzinho ‘Bigi Boy’ Rozenstruik takes on up and coming Ciryl ‘Bon Gamin’ Gane, in a high-voltage heavyweight clash. But, before that we had the prelims which kicked things off. Here are the results from the prelims!

Both men began the round with low kicks. Grishin’s jab then sent Jacoby crashing into the canvas. Jacoby escaped before Grishin took advantage of it. Grishin then landed low kicks before avoiding a high kick from Jacoby and hitting Jacoby with a big right hand. Jacoby’s nose is badly cut. 10-9 Grishin

Jacoby kept going for the jab. A strong left from Grishin to the body. Jacoby landed a series of jabs, all while avoiding Grishin’s strikes. They then traded kicks. A big hook from Jacoby then landed, rocking Grishin. The round ended with both the fighters trading punches. 10-9 Jacoby

Round 3 : Lawrence started the round as the aggressor stunning Cachero with a punch. Lawrence then slammed Cachero to the floor and then unloaded a flurry of punches, as the referee waved off the fight. Incredible KO!

Round 1: Mazo is pumping the jab well, as Davis tries to move forward and she is keeping her at distance and she inflicts some damage. Mazo’s jab is landing and Davis’s face has reddened up but she catches a kick and secures the takedown, and landed some heavy shots and maintained the position to win the round.

Round 2: Mazo is again fighting behind her jab and she is snapping her opponents head off with that, Davis is chopping the lead leg and is inflicting some brutal damage via leg kicks, as she starts to move in Mazo sticks the jab and now she is landing some combinations as well. With 30 seconds remaining Davis secures a takedown and lands some nice shots.

Round 3: Mazo started the fight with a kick but pays the price as the kick is caught and she gets taken down by her opponent. Davis maintains the dominant position throughout the round and finished the round strong.

Round 1: Both the fighters started the fight with a brawl and exchanged some good shots, Moises lands some nice leg kicks but Hernandez is countering it with punches and combinations of his own. Both these fighters are fighting neck to neck.

Round 2: Second round looks the same as well, Hernandez is chopping the lead leg of his opponent and it has started to take his toll but Moises switches the stance and lands a combination of his own. Very close second round as well.

Round 3: Both fighters still keeping up the pace landing shots and countering punches, Hernandez almost slips into a kick while going for a takedown but he collects himself and stays in the fight, equal exchanges from both sides and finished the fight strong,

Sudip Kumar Sahoo - April 11, 2021
Chrono is a very popular character in Free Fire and many players use him in their games. However, in this article we take a...