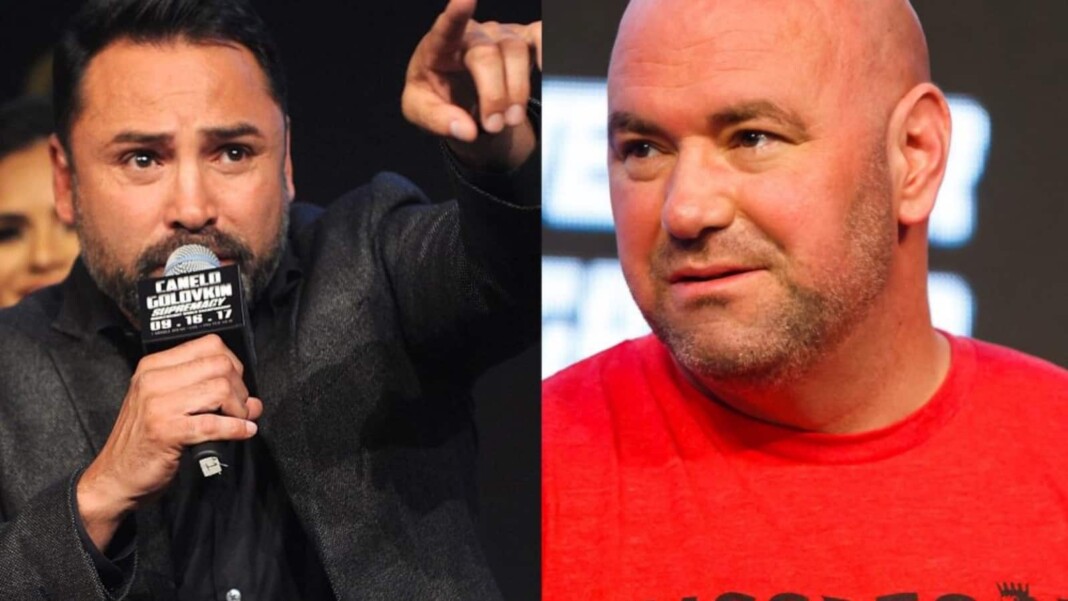 Oscar De La Hoya and Dana White found yet another reason to take a dig at each others’ controversies and hence initiate a Twitter feud. UFC 266 ended with the main event showdown between Alexander “The Great” Volkanovski and Brian “T-City” Ortega which was won by the champ. Since then, the world has been seeing this epic battle as a potential fight of the year candidate.

There have been many reactions to this showdown on Twitter, but one of those reactions turned into an interesting altercation between “The Golden Boy” and the UFC President, primarily based on the differences of how both the enormous figures of combat sports business run their promotions. So to not much surprise, Oscar, a legend in boxing, tweeted right after the main event of UFC 266 slamming White for not paying the champion Alexander Volkanovski properly after his intense five-round war with Brian Ortega. In general, Oscar believes that Dana doesn’t care for any of the fighters at all.

He wrote, “Hey @alexvolkanovski you just won a brutal battle for @ufc and made 1/20 of what you’re worth. @danawhite have some fucking respect for yourself and these fighters and pay these warriors what they deserve.”

Right after the aforementioned tweet, Dana White took his own turn on Oscar De La Hoya

White made sure that the “The Golden Boy” gets a taste of his words too and hence fired Oscar back referring to his troubled history with substance abuse and his pull out of the Vitor Belfort fight. He wrote, “STFU U crack head. Faking that u had Covid and robbing me of watching u get KTFO by @vitorbelfort you should win an academy award for your hospital performance.”

Also Read: Watch: Shocking!! “How he did that” Alexander Volkanovski stuns MMA world as he escapes Brian Ortega’s choke at UFC 266