The omicron variant has been taking a huge toll on the sporting industry. To damage control, the UFC has updated its COVID 19 protocols.

Among all sporting businesses, the UFC has turned out to be one of the most successful promotions. The MMA promotion has delivered time and time again in the age of pandemics without leaving their fans disappointed. The Ultimate Fighting Championship was one of the first major promotions to start out to fill an entire arena of fans.

Ahead of UFC 270, the first pay-per-view event of 2022, the UFC have decided to change their health protocols. Unlike before, the athletes and corner members who have the vaccination card suggesting they are fully vaccinated will not have to take any tests during the fight week or the prep. A pre-departure test alone would suffice.

But this is not the case for unvaccinated individuals. The promotion is not adamant about mandating vaccines for its employees or fighters. However, they will have to be tested and also undergo quarantine until the test report comes out negative.

UFC decide that masks will be mandatory for all

The MMA promotion is not looking to risk any more events to Covid 19. The first event of 2022 was also hit with some damage due to the virus. Despite some cancellations, UFC Vegas 46 turned out to be an amazing start to the new year for the promotion.

Previously, all fighters and corner members were forced to undergo Covid testing despite their vaccination status. The company has insisted that the masks are to be worn compulsory by everyone throughout the fight week. The upcoming UFC event is held at the Honda Center, Anaheim, California.

The fight is set to be headlined by the much-anticipated heavyweight title unifier fight of Francis Ngannou vs Ciryl Gane. The co-main event will be the flyweight trilogy title fight of Brandon Moreno vs Deiveson Figueiredo. The streaming rights are held by ESPN+ for the main card while the prelims can be viewed on ESPN. 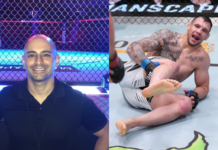 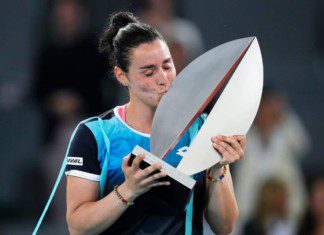 Sarthak Shitole - May 9, 2022
Newly crowned World no. 7 Ons Jabeur picked up her biggest career title at the 2022 Madrid Open when she defeated Jessica Pegula to...