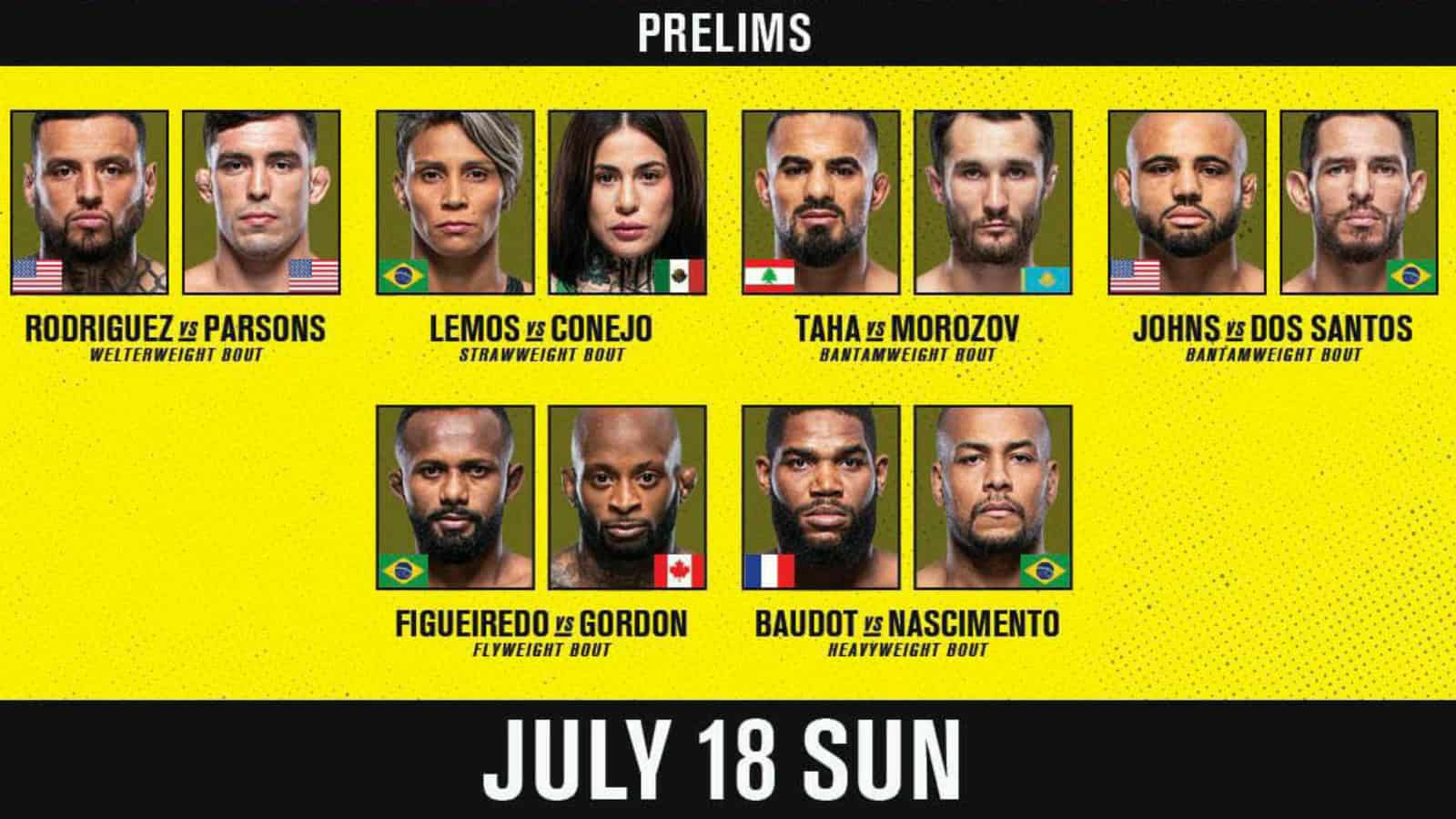 UFC Vegas 31 features a clash between two of the rising fighters in the lightweight division. Islam Makhachev vs Thiago Moises will be the fight to headline UFC Vegas 31. The event also hosts a stunning preliminary card with interesting matchups.

The battle between Makhachev and Moises is going to be very critical of the path this lightweight division takes. Another interesting feature of this fight is the return of the former UFC women’s bantamweight champion Miesha Tate. The fight takes place at the UFC Apex, in Las Vegas. The event begins with a 6 fight preliminary card. Let’s take a look at the results of the UFC Vegas 31 preliminary card.

Round 1: Both the fighters got busy right away as Baudot threw an early jab. Nascimento responded with a low kick and now both the fighters looking to get handsy. The two heavyweights started trading punches as Alan went for the clinch in the starting minutes. Now it was the battle for who gets the better position. Nascimento looking to move away and finally takes the outside of the cage. Baudot is seen attacking Nascimento with a few elbows as Rodrigo goes for the takedown. Nothing happens in the clinch so they begin again in the center. Baudot with some big shots as the round ended.

Round 2: Nascimento once again looks to push and drove forward. Ouch! kicks land to the groin, the round starts again. Nascimento put a lot of pressure as the round began. A beautiful uppercut from Nascimento as he hurts Baudot with it. The opponent is hurt badly but no stoppage so Nascimento decided to throw a flurry of bombs and now the fight is over. WOW!

Round 1: A surprise move from Gordon as the fighter immediately goes for the takedown after both the fighters touched gloves. Figueiredo defended that takedown really well. The fighter shoots again after the first failed attempt. Franciso moves to a better position as he wound up being dominant on the canvas. The fight took place all on the canvas with very few shots traded. This round turned out to be a grappling match between the two. Finally, some short punches landed by Gordon as the round ends.

Round 2: No time wasted this time around too. Gordon jumped into the takedown as the round started. But once again, Figueiredo is there to defend his opponent’s takedown attempts. For a short time, Gordon looked to take things to the feet but not for too long. Another failed takedown attempt. Figueiredo landed some quick jabs. The Brazilian is looking really good with his movement. With just 30 seconds to go, Gordon finally takes his opponent down but the bell goes before he could do something.

Round 3: Gordon drives forward and puts Figueiredo on his back immediately. Gordon gets the mount while Francisco looking to adjust and escape. Malcolm is not able to get much offense as Figueiredo does well. Finally, the Brazilian managed to try to get back on the feet but somehow manages to settle on top. Figueiredo looks for something on the neck but the round ends. A fairly defensive fight from both fighters.

Round 1: Low kicks from Taha at the beginning of the round as Morozov countered that with a right hand. Both the fighters looked real swift on their feet. Morozov shoots for a takedown and wraps the body of Taha. Taha is then thrown to the canvas. Taha made sure no real damage is done by his opponent while on his back. In the final minutes, there is an interesting scramble but the round ends before Taha could get dangerous.

Round 2: Second round begins as Taha comes out as the aggressor and follows with some punches. A beautiful exchange between the two fighters as Taha goes for the leg but Morozov responds with a beautiful uppercut. Another big right hand for Taha. Morozov changed levels and took the fight to the canvas. Taha tries to stand up but Morozov pulled him back down. Morozov looks to get a choke but time ran out.

Round 3: A huge left hand landed by Morozov as the final round commences. Taha responded with a few big shots of his own. Morozov shoots inside and Taha is taken to his knees. Morozov from the back looked to control and is relentless with it. Taha was not let to get back on his feet. At the last minute, Morozov decided to take things to the feet as he lets loose of Taha. Taha looking for the big finish but Morozov played well.

Round 1: Lemos began the fight with a body kick. She soon followed it up with a strong high kick. Ruiz looked to get close and put some pressure but Lemos was too nice with her right hand and clipped her opponent. Amanda soon follows it with a left that scores and Ruiz are down on the canvas. A continuous barrage of hammer fists from Lemos and the fight is over. Just like that.

Round 1: Rodriguez begins the round as the aggressor. Parsons did not look to waste any time and immediately went for the takedown. But Rodriguez managed to stand up. Both the fighters trade punches on their feet. Rodriguez’s punches seemed to have more power in them creating more impact. D-Rod pops Parson and scores a right hand. Preston seemed to be wobbling after that. Still, the fighter has not given up. Parsons leans on the cage as Rodriguez pounds away to stoppage. The fight is over just like that.

And that is all for the UFC Vegas 31 preliminary card. Which fight has been the best so far?