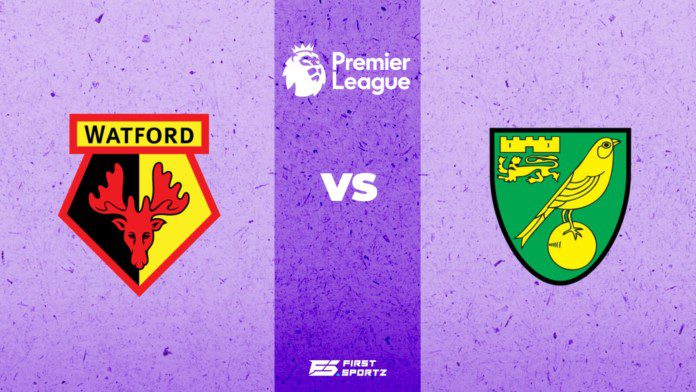 Watford vs Norwich City: Watford squared off against Norwich City at the Vicarage Road Stadium in Matchday 20 of the ongoing edition of the Premier League.

Watford was dominant in the 1st half but could not score any goal. In the 2nd half Norwich were able to take the lead with an unorthodox kick into the goal by Joshua Sargent. Soon after this, He scored a header to take the lead to 2-0 for Norwich. Then in the 90+2 minutes, Juraj Kucka scored an own goal to make it 3-0 for Norwich.

Let’s take a look at the player ratings for Watford vs Norwich City match:-

Daniel Bachmann (5/10): The Austrian goalkeeper did not have to do any serious saves in the 1st half. However, in the 2nd half, he has scored passes thrice.

Samir (6.4/10): The centre-back was pretty solid in the defence line making some important blocks and he was good in the air as well.

Christian Kabasele (6.3/10): The 30-year-old defender was also solid in the defence line making some good stops from Norwich. His passing was also praiseworthy.

Hassane Kamara (6.4/10): The left-back was really good today in his off the ball movement. He was also good on the ball going forward as well.

Kiko Femenía (6.2/10): The Spanish right-back had a decent performance tonight carrying the ball and putting crosses into the box.

Edo Kayembe (6/10): The 23-year-old midfielder played some good passes and was able to carry the ball well in the middle of the park.

Tom Cleverley (6.3/10): The English midfielder had a decent performance tonight as he made some good passes and also was good on the ball.

Moussa Sissoko (6.3/10): The French midfielder played really good tonight. He made some good runs into the box but could not do much more than that.

Joshua King (6/10): The Norwegian forward tried to put pressure on the opponent defenders by running at them, but he could only manage some passes and off the target shots.

João Pedro (5.8/10): The young forward made some shots at the goal and played a few good passes. That’s about everything he could manage.

Emmanuel Dennis (4.5/10): The Nigerian striker had some bright moments in attack. However, he was sent off in the 2nd half following a nasty challenge.

Cucho Hernández (4.5/10): He did not have a very impactful performance after coming on as a sub. The only things he could manage were some passes and interceptions.

Juraj Kucka (2/10): He scored his own goal soon after coming on as a sub. After that, he only managed a few passes in the remaining time.

Ben Gibson (6.5/10): The 29-year-old centre-back was really solid in the defence making important blocks and interceptions.

Grant Hanley (6.6/10): The Scottish defender was equally solid in the defence as well. He was also good in the air as well.

Brandon Williams (6.4/10): The young full-back had an impactful performance defensively as well as offensively. He carried the ball well into the opponent’s half.

Max Aarons (6.3/10): The right-back played some good passes with his teammates and his performance tonight is really praiseworthy.

Pierre Lees-Melou (6.4/10): The attacking midfielder was decent in his performance tonight making some good interceptions and combining well with his teammates.

Jacob Lungi Sorensen (4.5/10): The Danish midfielder’s night was short-lived as he had to be subbed off in the 1st half following an injury.

Milot Rashica (7/10): The winger played some really good passes and his off the ball movement was also quite impressive. He also assisted the 2nd goal for the away side.

Joshua Sargent (8.5/10): The American forward was absolutely fantastic tonight as he scored two amazing goals, the first one being more brilliant than the second.

Teemu Pukki (7/10): The Finnish striker played a really important part tonight in the match as he kept running at the defenders. He also assisted the 1st goal for Norwich.

defenders. He also combined well with his teammates.

Kenny McLean (6.3/10): He came on as 1st half substitute for injured Sorensen and played an important part both defensively and offensively.

ALSO READ: “Loads of abuse, loads of banter”- Steven Gerrard ahead of the clash against Everton