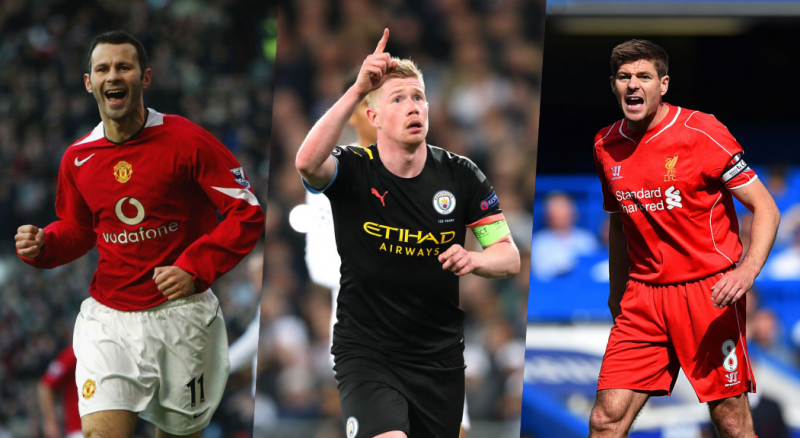 The Manchester City icon midfielder Kevin De Bruyne was contrasted by Wayne Rooney with the stars of Man United and Liverpool, Steven Gerrard and Ryan Giggs.

De Bruyne returned to the Premier League in 2015, following his tenure with Chelsea.

City spent £55m to introduce him to Etihad Stadium from Wolfsburg. Since then he has been a the keyman for the City side. He scored 56 goals and registered 89 assists in 220 appearances for the club.

Wayne Rooney praising De Bruyne, in the latest column of The Times:

“There’s no doubt Man City’s biggest weapon is De Bruyne, arguably one of the top three players in the world right now

“Playing against him was never, ever, easy and I’ll always remember Everton using me and Morgan Schneiderlin, in a 4-4-2, against a City midfield of De Bruyne, David Silva and Fernandinho, with Sterling dropping in.

“They absolutely outnumbered us. Me and Schneiderlin were in the middle of the pitch saying, ‘What’s going on here?!’ We were 3-0 down after 37 minutes and had 18 per cent possession in the game.

“De Bruyne reminds me a bit of Steven Gerrard. He drifts out to that right-hand side and plays some brilliant balls whipped in, like Stevie used to. What I like most is he takes chances, he takes risks. He doesn’t go for the easy ball – he plays the hard pass.”

“You watch, when he’s in possession in space other players start running and that’s the biggest compliment you can pay a midfielder.

“When I played with Ryan Giggs and Giggsy got the ball, I made runs because I knew he’d try and find me, and if it came off he’d get me through on goal. De Bruyne is like that. Teams think they can force him to play it to the side but he can squeeze those passes through the smallest gaps.”