Alexa Bliss is one of the most talented Superstars on the WWE roster currently. She was signed by the company nearly a decade ago in 2013 and has been on the main roster since 2016. In just a few years she has already become a multi-time Champion – having won the Raw Women’s Championship thrice in her career and the Smackdown Women’s Championship twice.

In the last couple of years she has shown the WWE Universe she is not only an exemplary in-ring performer but can also do some amazing character work. She has been playing a suprtnatural character in the recent years – and has feuded against some of the top Superstars of the company like Randy Orton and Charlotte Flair.

But recently Alexa Bliss has been on a hiatus from the company. She had gone on one right after her match at Extreme Rules. The Goddess of WWE had returned earlier this year – and was appearing in therapy sessions, before making her in-ring return at the Elimination Chamber. Surprisingly, right after one in-ring appearance, Bliss once again went on a hiatus!

There have been numerous speculations around her return to the company, but all have been just baseless rumors. But Alexa Bliss remains to stay in touch with her fans through her social media handles. Interestingly, fans were reminded were Bliss, due to an All Elite Wrestling star!

AEW star Julia Hart was recently involved in a match against Hikaru Shida, on the latest episode of Dynamite. During the match she delivered a Twister Bliss – which is a move which has been popularized by Alexa as her signature move. Reacting to her move being used, the Goddess of WWE took to Twitter to share the Spider-Man pointing at Spider-Man meme!

Alexa Bliss was speculated to appear at Wrestlemania 38

Wrestlemania is the biggest event on the WWE calendar. It is the one event where the company goes all out with their surprises. Hence, out of the many speculated returns – Alexa Bliss’ returns was highly anticipated too. But unfortunately, she did not show up.

Mike Johnson of PWInsider reported that Bliss was not even in Dallas, Texas during the Wrestlemania weekend. Even then, WWE had created a set depicting Alexa’s Playground at the WWE Superstore Axxess – where fans could click pictures.

Also Read: REVEALED: When will Lacey Evans return to WWE? 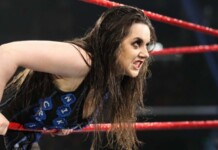 Sarthak Shitole - May 18, 2022
World No. 1 Novak Djokovic has finally found his form which was on display at the 2022 Rome Masters where he clinched his 6th...

“I was the one who was being hunted,” Max Verstappen reflects...