“I was horrified,” Shinsuke Nakamura reflects on his match against Great Muta 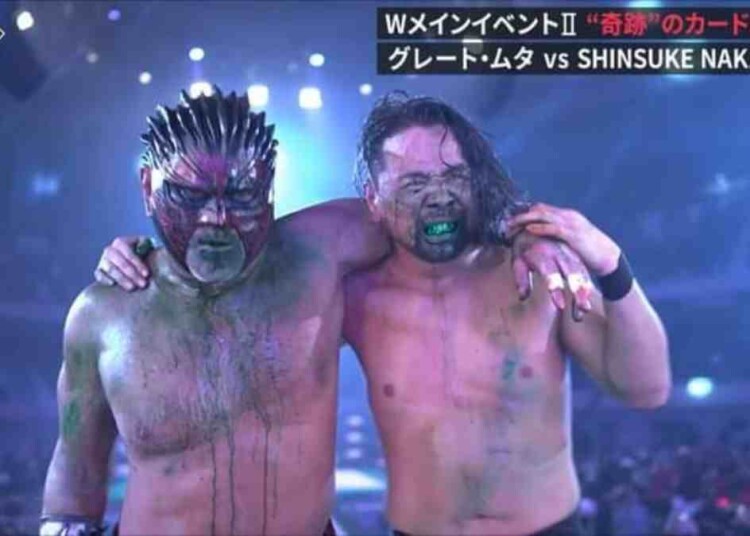 Great Muta and Shinsuke Nakamura, after their match at NOAH The New Year 2023 (via Pro Wrestling NOAH)

Shinsuke Nakamura, regarded as one of the best Japanese wrestlers of the modern era, has grabbed the limelight since the first day of the year. After a 7-year absence, the King of Strong Style returned to Japan to wrestle against Japanese legend Great Muta, at Noah’s New Year 2023 at the Nippon Budokan in Tokyo. Earlier, Muta, a.k.a. Keiji Muto had already announced his last match was going to be at Pro Wrestling Noah on February 21, 2023.

The match between the two stars was the main event of the 1st January show. And now, Nakamura has given some insights into how he was feeling on the big day. While talking with Tokyo Sports, he commented on the circumstances surrounding the event, “When I woke up this morning, I was horrified, ‘Is it a dream?’ I thought I was really exposed, from the time I entered the ring until the time I left. I’m happy that I was able to confidently say, ‘I’ll show you my dreams’ early in the New Year, without being shy. And that too in Japan.” (Translated from Japanese)

In his last NJPW match, Shinsuke Nakamura defeated AJ Styles to retain the IWGP Intercontinental Championship at Wrestle Kingdom 10. But later, as he announced that he had signed a deal with WWE, he was stripped of the title. WWE confirmed the signing in February and announced his debut at NXT TakeOver: Dallas.

Nakamura won that match against Sami Zayn, which collected high admiration from all around the world. The match against Great Muta was the first time he has wrestled for a promotion other than WWE since then.

In the same conversation with Tokyo Sports, Shinsuke Nakamura revealed that the Chief Content Officer of WWE, Paul Levesque, AKA Triple H, sent him words of encouragement. Hunter expressed his gratitude to Nakamura for fulfilling his dream of facing his idol, Great Muta. It was a hard-hitting match where the former NXT Champion put the legend to the test. In the end, Nakamura stole the green mist from his opponent to win the match.

Even in NXT, Triple H had a more open mind about working with other promotions than his father-in-law. And it is evident from their recent actions that Co-CEOs Stephanie McMahon and Nick Khan share this mentality. With WWE and their rival AEW both now opening up their gates for other promotions like NJPW and NOAH, it creates an interesting landscape for the future of pro wrestling.