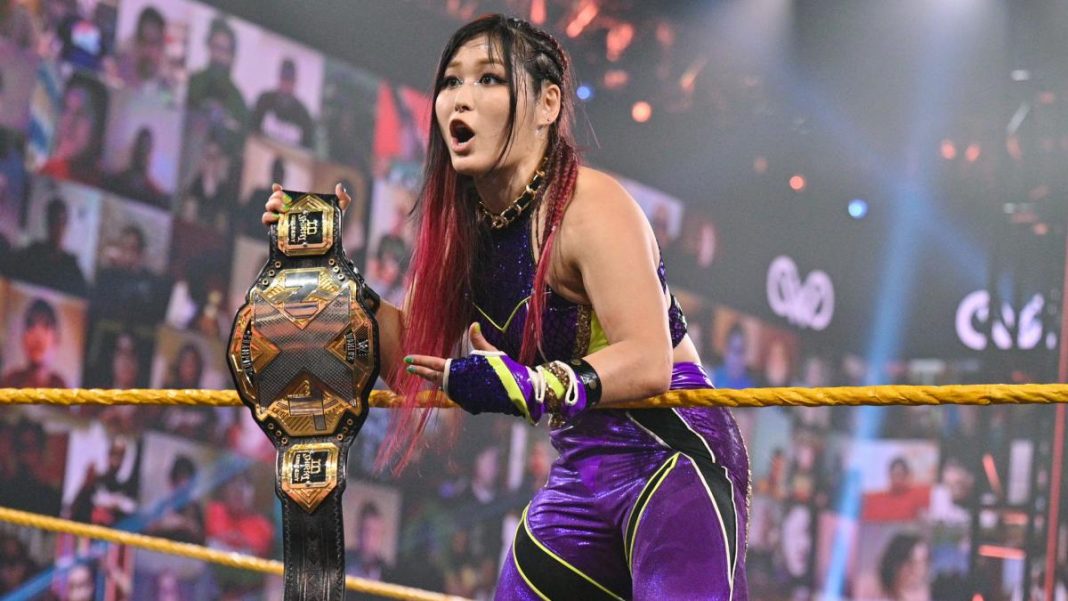 The episode kicked off with a highlight package of the rivalry between NXT Cruiserweight Champion and Karrion Kross. NXT GM William Regal had announced last week that if Escobar failed to show up for the match against Kross, his Championship would be stripped off.

Gargano was accompanied by the members of The Way, to the ringside. As the match began, Gargano rushed towards Lumis, but was fisted down. Lumis followed with a Thesz Press to get a two-count.

The Way tried to distract Lumis, but his focus was unaffected. Theory and LeRae continued to taunt him, while Hartwell seemed infatuated with him. Gargano avoided a double stomp off the top and broke away from The Silence. A distraction by Gargano set up Theory to hit Lumis with a steel chair.

When Lumis turned, though, Theory couldn’t do it. It seemed that he felt they had a connection. Lumis sent Gargano into Theory and choked him out with The Silence.

Prior to the match Isaiah “Swerve” Scott attacked Ruff with a running boot. He was frustrated because Ruff was getting things handed out to him. Swerve felt he was not being valued. He launched Ruff spine first into the apron. Malcolm Bivens handed the victory to his client Tyler Rust.

Stark took down the Champion early in the match. But Shirai got back her momentum with a basement dropkick to the jaw. But Stark managed to counter a 619 attempt and sent Shirai to the floor.

They met in the middle with a pair of running crossbody splashes, that left them both out on the mat. Shirai fired up, and dropped Stark with a flapjack. A super hurricanrana and double underhook backbreaker nearly put Stark away.

Stark dropped Shirai with a German, but it wasn’t enough. Shirai countered a second, sending Stark face-first into the bottom turnbuckle and won via pinfall.

Toni Storm interrupted after the match, and mentioned that Shirai was incapable of defeating her.

As the match began, Li caught Catanzaro mid-air and dropped her chest first onto the ropes. Catanzaro did manage to pull a few punches, but they weren’t enpugh to take Li down. Li slinged Kacy into the steel steps.

Catanzaro’s knee seemed to have blown out and the referee called off the match. Kayden Karter tried to go after Tian Sha but Li attacked Catanzaro again.

Dain hit a massive running dropkick. Gibson tagged in and went for the Doomsday Device, but Dain made the save for Drake Maverick. He tossed GYV to the floor and threw Drake onto them.

An overhead belly-to-belly suplex dumped Drake in the corner, and Gibson was launched into his partner by Dain0. He  dropped the Grizzled Young Veterans with a nasty Samoan drop/fallaway slam combination.

Drake Maverick pelted James Drake with strikes and tripped him up with a basement dropkick to the knee. But he was hit with the Ticket to Mayhem, as GYV picked up the win.

Legado Del Fantasma accompanied Escobar. But Kross took them out before the match, but Escobar attacked him from behind. Kross chased Escobar into a truck, where the door was slammed onto Kross’ arm, and LDF attacked him again.

Escobar threw the duo into the truck, as Escobar attacked him with a trash can. All of them got inside the CWC, where Kross launched LDF through the plexiglass. Kross and Escobar entered the ring.

Escobar used the steel chair and steps to attack Kross. He tied Kross’ arm around the steel chair and drove it into the ring post. Escobar was trying to dislocate Kross’ shoulder again. But Kross fired up, and attacked with the chair, sending LDF through the plexiglass again.

Kross sent Escobar crashing through the announcer’s table, followed by an elbow to the back of the head, to pick up the win.

Cole came out to explain his actions. He had attacked NXT Champion Finn Balor and Kyle O’Reilly. Cole mentioned that he hated what he had become. O’Reilly kept on getting opportunities despite his failures.

But he wanted to talk to O’Reilly. He hated to admit that he was wrong. Cole apologized as Roderick Strong came out. Finn Balor rushed to the ring too, and attacked Cole. Strong decided to help Cole and brawled with Balor.

Roderick took out Balor with a Super kick. He shared an emotional moment with Cole inside the ring. They were emotional. But Cole hit Strong with a low blow and teared off his dog tags.

Also Read: “We don’t do anything anymore” – Ric Flair opens up about fallout with Arn Anderson

Somdeb Khaskel - April 11, 2021
Leeds United wrote a fairytale story against the Champions elect of the Premier League as they won 2-1 at the Etihad Stadium. Stuart...