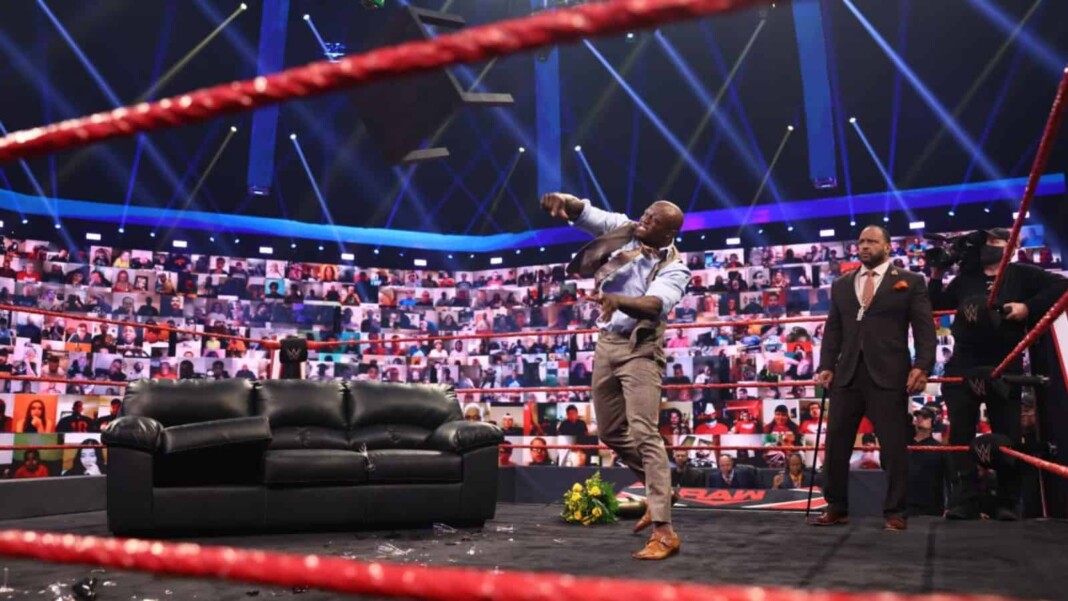 The Thunderdome Era ended with a great extravaganza. Monday Night Raw hosted the last show inside the WWE Thunderdome which was entertaining.

The match started with Bobby Lashley dominating and manhandling Woods. The WWE Champion tossed Xavier Woods around the ring when the latter evened things with a senton. Woods then delivered a tornado DDT to Lashley and then took him out of the ring to deliver a suicide dive. Lashley then fought back and delivered a thunderous spinebuster to Woods for tow counts. He then delivered a spear to Woods and went for the Hurt lock but the latter rolled him for a victory.

Backstage (after the match), MVP said that the Almighty Bobby Lashley left the arena after his humiliating loss.

Bliss asked some questions to Doudrop but Eva Marie interrupted her everytime and praised herself everytime. Eva insulted Bliss and left the playground.

Jinder Mahal came out with a broken sword and said he stole McIntyre’s sword. He said he broke McIntyre’s sword when the latter showed up via titantron. He said that the sword Mahal broke was the fake one and then broke Mahal’s motorcycle in front of him.

The match started with Bliss delivering a crossbody to Naomi when Asuka tried to take Naomi out as well. Bliss delivered a DDT to Asuka when Eva Marie and Doudrop came out to have a closer look at the match. Alexa Bliss then screamed at Eva when Doupdrop attacked her and sent her over the barricade. Asuka then took both Nikki and Naomi out with power strikes when Bliss disappeared. Naomi then powered down both the women and went for a double cover but both of them kicked out. The three women then tried to lock submission moves on each other when Nikki rolled Asuka to get a pinfall victory.

The match started with Ivar using his emmense power to take the former World Champion down. Omos then distracted Ivar which enabled Styles deliver a kick to the back of the neck of his opponent. Ivar then delivered a big back body drop to Styles followed by a crossbody to get the upper hand in the match. Styles then tried to fight back but Ivar delivered a slam to the champion and pinned him to get the victory.

Erik started the match with an attempt of a German suplex on the giant when the champion caught him with the bear hug. Erik tried to take Omos down with power strikes but the latter caught him with a chokeslam to get a quick victory.

Carilloo, being injured, got the match started but ran into a brogue kick allowing the champion to retain.

Sheamus then continued to attack Carillo when the Archer of Infamy, Damian Priest, came out to help him.

The match started with Morrison using the distractions created by Miz to get the upper hand. Morrison drove Ricochet into the barricade when the latter fought back with a German suplex for two counts. Ricochet then delivered a 450 splash to Morrison from the barricade followed by another splash to the veteran for tow counts. Morrison then set a ladder between the ring apron and the announce table.

Both the men then continued exchanging blows and went backstage continuing their match. Morrison attacked Ricochet backstage and then came back to ringside. Ricochet pushed Miz’s wheelchair across the stage and continued to deliver power strikes to Morrison. Miz then tried to use the dripstick to distract Ricochet when Riddle came out the even things for Ricochet. Morrison got back in the ring and so did Ricochet when the latter delivered a recoil to the former. Ricochet then set the veteran on the ladder and delivered him a dive through the ladder to get the win.

The Raw Women’s Champion started the match with her brutal power strike on Natalya. The two women then reversed each other’s moves and tried pin each other frequently. Natalya tried to lock the sharpshooter early but Ripley kicked her out of the ring followed by an attack on Tamina. Ripley then took Natalya in the ring and delivered a Northern lights suplex to the tag champion. Natalya fought back with a powerbomb followed by the sharpshooter. Ripley sent her into the turnbuckle and then delivered the riptide to get the win.

After the match, Charlotte Flair attacked Ripley and locked the figure eight leg-lock to put some damage and deliver a statement before Money in the Bank.

MVP came out with the girls and called his guest Bobby Lashley out. The champion came out after the third introduction and was furious about his loss to Xavier Woods. Lashley said that Kingston was right and that it was MVP who was the root of the distractions. He asked MVP to leave everything behind and get back to business before destroying the set. The WWE Champion then promised to tear Kingston in half at Money in the Bank and also claimed to end his career.

It was a shocking Raw to end the Thunderdome Era as the WWE Universe returns this Friday on SmackDown. Stay tuned to FirstSportz for more updates.

ALSO READ: Why SmackDown star is not being punished despite arrest