by Niyati
in Badminton 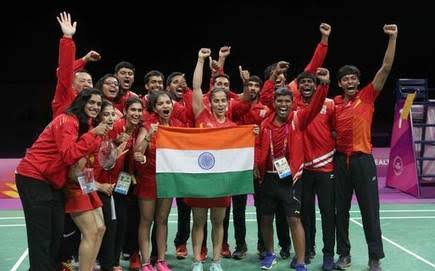 If the story of Indian shooting this decade can be called one of hope, despair and revival, that of Indian badminton should be of hope, triumph and uncertainty.

As the decade began, Saina Nehwal was fast emerging as a star. Having already become the 1st Indian to win a Super Series title, she was looked upon as, not just in India but internationally, the only player who could challenge the Chinese dominance in Women’s Singles(WS). She did her reputation no harm after winning 3 BWF Superseries titles in 2010. That year she also became the 1st Indian win a Gold at the Commonwealth Games in WS (a feat she would repeat in 2018), and doing so in front of a home crowd would have been even more special for her.

Also winning Gold at the CWG 2010 were the Women’s Doubles pair of Jwala Gutta and Ashwini Ponnappa. In 2011, after reaching the semi finals, the pair became the 1st Indians to win a medal at the World Championships since Prakash Padukone won bronze in 1983.

Their achievement kickstarted India’s consistent run at the Worlds; since 2011, India have won at least 1 World Championship/Olympic medal in badminton, a streak which continues till today.

In Men’s Singles the most prominent name at the start of the decade was Parupalli Kashyap, who won bronze at the 2010 CWGs and later went on to win a historic Gold at the 2014 CWGs.
Saina, Jwala-Ashwini and Kashyap also helped India win the Mixed Team Silver at Delhi 2010.

Unsurprisingly, Saina was the biggest medal hope from Badminton going into the 2012 Olympics. And she did not disappoint: though her Bronze at these Olympics could be said to have come under somewhat fortunate circumstances (her Chinese opponent had to forfeit the Bronze medal match due to injury), it could also be said her medal was a just reward for her hard work, talent and consistency.

Jwala-Ashwini were unlucky to not progress beyond the group stages despite winning 2 of their 3 matches in a WD competition marred by controversy. Kashyap became the 1st Indian MS player to reach the quarterfinal stages of an Olympics. Overall the future of Indian badminton looked bright.

And it became even brighter with the emergence of PV Sindhu. Having won the 2012 Asian Junior Championship, she soon broke into the top 20 of the World Rankings at the age of 17. She announced herself internationally at the 2013 World Championships, where she beat the seasoned Chinese shuttlers Wang Yihan and Wang Shixian on the way to winning the Bronze. She won Bronze again the following year, after losing to a rampaging Carolina Marin in the semis.

2014 was also the breakthrough year for Kidambi Srikanth. Srikanth stunned the badminton world when he beat the Chinese legend Lin Dan at the final of the 2014 China Open. With Saina also winning the WS event at the same tournament, seeing 2 Indians on the top of the podium at the home of the badminton superpower China was a sight to behold.

Having become the 1st Indian World No.1 in badminton since the modern BWF ranking system was introduced, Saina again was the main medal contender from India heading into the 2016 Olympics, with Sindhu and Srikanth as dark horses. Sadly, Saina’s campaign ended in the group stages after she suffered a shock upset at the hands of a Ukraine shuttler. It was later revealed that she had carried a knee injury during these Olympics. Srikanth put up a valiant fight, but lost to Lin Dan in the quarters.

So it was upto Sindhu to revive India’s fortunes; and revive she did and how! First she thrashed the deceptive Tai Tzu Ying, then out-smashed Wang Yihan in the quarters, and then beat Nozomi Okahura in the semis in straight games. This ensured she would become the 1st Indian woman to win at least a Silver at the Olympics. With these performances she became the toast of the nation. After a hitherto disastrous Olympics, she and Sakshi Malik brought some respectability to India’s position in the medal tally.

Millions of Indians were glued to their TV sets and cell phones to see Sindhu’s final against Marin. Though she lost in a close contest, she became an instant superstar in India. All badminton fans would be aware of the endorsements, gifts and cash awards showered on her following her Olympic Silver.

And since then she has gone from strength to strength, being especially dominant in major BWF events, be it winning Silvers at the 2017 World Championships (where she narrowly lost to Okahura in one of the greatest matches in WS history) and the 2018 event, or winning the BWF World Tour Finals in 2018. Her greatest victory came at the 2019 World Championships in Switzerland, where she finally became the World Champion.

Following Sindhu’s rise, another shuttler made his mark on the international circuit. Although Srikanth won his first Superseries title in 2014, the best year of his international career has been 2017, a year when he won 4 SS titles including 2 SS Premiers. He was also the runner up in the 2017 Singapore Open Superseries, where he lost to another Indian Sai Praneeth. He became World No.1 in 2018, and helped India win their 1st ever Mixed Team title at the 2018 CWG. Though a World Championship medal has eluded Srikanth, Sai Praneeth managed to win a Bronze in this year’s tournament. HS Prannoy’s giant-killing acts have been the other highlights from Indian MS.

Indian Doubles has not kept pace with Singles since Jwala’s retirement but the young MD team of Satwik Rankireddy and Chirag Shetty hold a lot of promise for the future. They have already won their 1st BWF Super500 tournament, and have come close to defeating top teams in other tournaments.

From junior badminton, the biggest achievers have been Siril Verma who won a Silver at the 2015 World Junior Championships, and Lakshya Sen who was the winner of the 2018 Asian Juniors and won Silver at that year’s Youth Olympics. Lakshya especially has been the rising star, having won several senior tournaments this year and being currently ranked World No. 32, all this at the age of 18.

What Does The Next Decade Hold?

Despite a successful 2010s, there is plenty of cause for concern for India going into the next decade. Srikanth’s form has dramatically declined since the departure of his coach Mulyo Handoyo. There is a risk of the same happening with Sindhu following the departure of her coach Kim. Apart from Pulella Gopichand, there are no real world-class Indian coaches, either at the senior or junior level.

This shortage of coaches has been severely felt in WS, where the gap between the top 2 and the other Indians is huge. And since Sindhu’s 2012 triumph, no Indian has won a WS medal in the World or Asian Juniors. And with Saina not getting any younger, there is a big risk that Indian medals in WS will dry up once Sindhu retires.

In MS and Doubles too the situation is not much better. Lakshya and Satwik-Chirag are the only ones who have the potential to reach the levels of Saina and Sindhu. All the other senior shuttlers have not been consistent internationally.

So the BAI, SAI and Sports Ministry should take steps to ensure that a continuous supply of top class talent is available, be it players, coaches or support staff, and also ensure efficient usage of funds.

The NRAI junior program is an excellent model for the BAI to follow, and as fans (and taxpayers) we can only hope those in charge of Indian badminton take the correct decisions and do not allow Indian badminton to decline going into the 2020s.