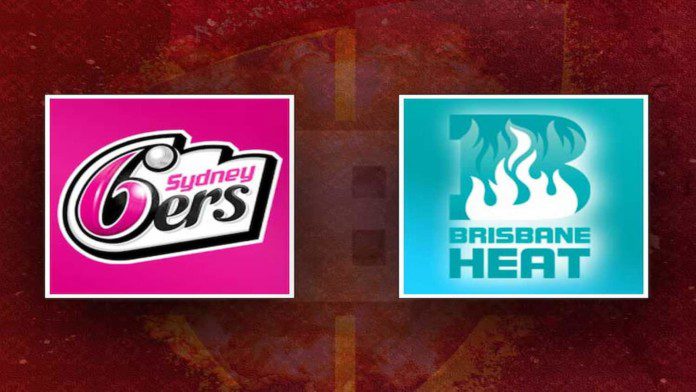 The Sydney Sixers and Brisbane Heat are set to compete against each other in the Match 54 of the Big Bash League. The HEA vs SIX battle is scheduled to take place at Brisbane Cricket Ground on Wednesday, 19th January. In the previous meeting between the two, SIX had a 2-wicket victory over the HEA in a close game. Currently, the SIX is at the 2nd spot in the league table with 31 points in 13 games. On the other hand, the HEA is out of the contest for a top 4 spot. Currently, they are sitting at the 7th spot with 16 points in 13 games.

Sixers played their previous match against the Strikers, which ended up in a defeat by 8 wickets. Batting first Sixers posted a total of 161/7 on the board with Justin Avendano scoring 52. In reply, the Strikers batsmen reached the target with 15 balls to spare and 8 wickets in hand. On the other hand, Heat also faced defeat, which is their fifth on the trot, against the Scorchers by 6 wickets. Batting first Heat posted a decent score of 155 on the board with Max Bryant top-scoring with 81. However, it proved to be too easy for the Scorchers batsmen as they chased the target in the 19th over with 6 wickets in hand.

Where to watch:  Live on Sony Sports Network

It’s a tailor-made surface for the batters to score runs pretty easily. The bowlers need to be extremely precise in their line and lengths if the batters are in full flow. Batting first is always a good option here. The team batting first would like to score 180+.

Conditions will be cloudy throughout the HEA vs SIX contest. The temperature will be hovering around 26-28 degrees Celsius. There will be interruptions in the game as a couple of showers are forecast.

Josh Philippe is the top run-scorer for Sydney Sixers with 406 runs at a strike rate of 145. He has struck 34 fours and 15 sixes. He is a must=pick for your fantasy teams.

Hayden Kerr has been the best bowler for Sydney Sixers and has picked up 19 wickets while bowling at an average of 13 and an economy rate of 7.30.

Ben Duckett is the top run-scorer for Brisbane Heat with 299 runs at a strike rate of 130. He has struck 31 fours and 6 sixes.

James Bazley has been the best bowler for Brisbane Heat and has picked up 12 wickets while bowling at an average of 25 and an economy rate of 8.03.

Probable XI for HEA vs SIX

Looking at the current form and team combination, Sixers is expected to win this game and end their league run on a high. However, the Heat will give tough competition to keep their hopes of a top 4 spot alive.

Anish Arora - May 18, 2022
The world of Formula 1 has grown substantially in the recent years. This growth has translated into new markets and new avenues opening up...

“There is no way,” Jolyon Palmer believes Carlos Sainz will not...