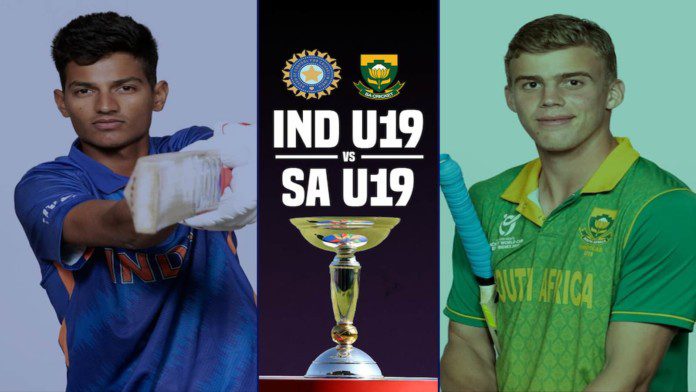 India Under 19 will take on South Africa Under 19 in the 4th match of the ICC Under 19 World Cup on Friday, 14th January. IND-U19 vs SA-U19 will be played at Providence Stadium Guyana. India has won the U19 World Cup three times while South Africa has only once back in 2014 under the leadership of Aiden Markram. Yash Dhull will lead the Indian team while Harnoor Singh, SK Rasheed, and Rajangad Bawa are some of the players you need to keep an eye on. India last won the title under the captaincy of Prithvi Shaw in 2018.

South Africa Under 19, on the other hand, last emerged as the champions back in 2014 when they defeated Pakistan in the final by 6 wickets. They are aiming for their second title and are hopeful of starting this tournament on a winning note. George ver Herdeen will be leading the South African side that consists of talented players such as Dewald Brevis and Ethan Cunningham.

The pitch at this venue looks to be a neutral one. Both the batters and the bowlers have to be at their best on this wicket. As the game progresses, it is expected to become slower and start assisting the spinners as well. 250+ will be a good total here.

The weather at Providence Stadium will be mixed throughout the IND-U19 vs SA-U19 battle. There will be widely spread thunderstorms in the morning but other than that it would be pleasant with sunshine and some clouds. The temperature will range between 25-30 degrees Celcius.

Harnoor Singh is an impressive left handed batter who had a great outing in his last warm-up match against Australia Under 19. He scored an unbeaten 100 off 108 balls with the help of 16 boundaries. He is a must-pick for your fantasy squads.

SK Rasheed also played well in the warm-up game against Australia U-19. He returned to the pavilion after scoring 72 runs. He was the top-scorer for India U19 in Asia Cup.

George van Heerden played a captain’s knock of 61 runs in the last warm-up match against West Indies Under 19. He would be a good pick for your fantasy teams.

Dewald Brevis is a talented all-round cricketer. In his last outing against West Indies Under 19, he scored 50 runs with the help of 4 fours and 2 sixes. He is expected to be the key player for South Africa Under 19 in the tournament.

Looking at the current form and team combination, IND-U19 is expected to win this game. They got 2 wins in 2 warm-up games and will most probably dominate in this game too.

Nirmit Mehta - January 18, 2022
Naomi Osaka has been one of the standout names on the WTA Tour over the past few years. In just a span of three...