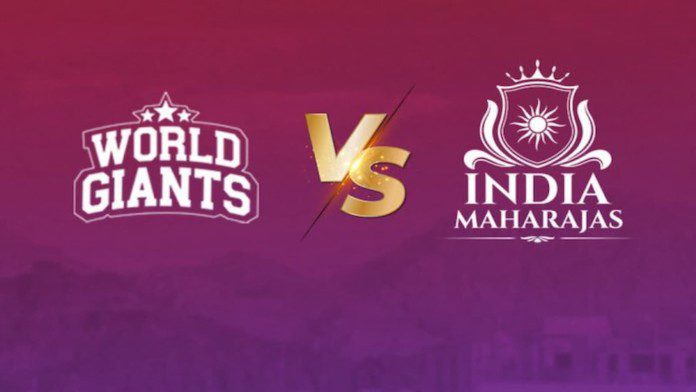 India Maharajas will take on World Giants in the 6th match of the Legends Cricket League 2022. The WOG vs INM battle will be played at the Al Amerat Cricket Ground (Ministry Turf 1), Al Amerat on Thursday 27th January. India Maharajas and World Giants had an exciting contest last time these two meet against each other. The INM was beaten by an improbable inning in the last moments of the game by veteran spinner Imran Tahir. Before this, Naman Ojha had played a blistering knock of 140 runs including 15 fours and 9 sixes for the Indian Maharajas.

Meanwhile, World Giants are already into the finals with a win against Asia Lions in the previous game. Kevin Pietersen played a smashing knock of 86 runs off just 38 balls. The duo of Morne Morkel and Ryan Sidebottom also picked up 2 wickets each. The World Giants have nothing to lose in this game. Indian Maharajas on the other hand have a must-win game. They will be knocked out if they failed to win this game.

The pitch is heaven for the batsmen. The average score here is 183. Once again the team winning the toss would like to chase at this venue. It is very difficult to contain runs once the dews play its role in the second innings.

Conditions will be pleasant throughout the WOG vs INM contest. The temperature will be hovering around 20-24 degrees Celsius. There will be no interruptions in the game as the weather will remain clear.

Naman Ojha became the first player to hit a century in this tournament. His phenomenal innings of 140 runs against World Giants has been the highlight of the tournament. In 3 innings he has scored 164 runs at an average of 54.67.

Yusuf Pathan has got an enormous amount of power at his disposal. He played an aggressive inning of 80 runs from 40 balls in the inaugural game against Asia Lions. In 3 matches he has scored a total of 107 runs at an average of 53.5.

Kevin O’ Brien reads the game well and applies his skills accordingly. In 3 matches in this tournament, he has scored 135 runs at a strike rate of 177.63, with the highest score of 95.

Kevin Pietersen has struck two back-to-back half-centuries in this tournament. The 41-year-old Southpaw has accumulated 153 runs at an average of 51, with the highest score of 86.

Probable XI for WOG vs INM

Looking at the current form and team combination, INM is expected to win this game and book their place in the finals. However, INM will be looking to improve their death bowling.

Prateek Sinha - May 18, 2022
Petra Kvitova is a former world number two and the two-time Wimbledon champion. She is a Czech star and has won 28 career titles....